A ruthless, single-minded man with an insatiable lust for power.

The Emperor is one of the villains fighting for the side of Chaos in Dissidia Final Fantasy. He is a man capable of casting powerful spells. With an iron fist, he will stop at nothing to achieve his objectives. As one of the higher-ranked villains, he plots with Ultimecia to take control of the world, rather than most of the other villains who seek to destroy it. His desire to rule all stands in opposition to Firion's dream of a world free of war and oppression. 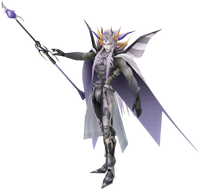 The Emperor's outfit is heavily based on his Amano artwork from Final Fantasy II. The Emperor wears gold and purple armor with a purple cape, and has long blond hair. His armor is decorated with small spikes, purple and white stripes, and demonic faces including one on his back obscured by his hair. His gauntlets sport extended claws. On his head sits a purple crown with a snake head emerging from it, a possible allusion to his form as the Emperor of Hell which has a crown of multiple snake heads.

The Emperor's alternate outfit is a black and white palette swap, based on an image of the main cast of Final Fantasy II, as well as his appearance in the Final Fantasy Origins FMV.

The Emperor is allied with Ultimecia, and together the two execute a plan to destroy Cosmos and end the cycle of war in Chaos's favor. As part of the plan, the Emperor convinces Jecht that he will be able to return to his homeworld with Tidus if he helps him. The other villains follow the Emperor's plans, which include testing the heroes' resolve and eventually allowing them to claim their Crystals.

The Emperor and Ultimecia approach Sephiroth and offer him a role in their alliance, but are rejected. The Emperor notices Bartz spying on them but allows him to escape, having sensed the Warrior of Light approaching, and instead dispatches Exdeath to pursue Bartz. Once fighting the Warrior, the Emperor attempts to bribe his loyalty by presenting a fake Crystal, but the Warrior of Light easily sees through the ruse and destroys it. After the Warrior tells him that the Crystals are not earned by mercy, but by strength, the Emperor attacks him. He loses and disappears, but not before he questions the Warrior's resolve, telling him that he will know the whole truth of the battle soon enough. At some point later, Kefka ends up meeting with Emperor Mateus about what Sephiroth is planning. Kefka doesn't seem to care, as he feels that Sephiroth isn't really special due to the fact that he's "Yet another sadistic maniac with a god complex." Kefka seemed to react with surprise when he learned from Mateus that Sephiroth apparently killed himself in front of Mateus in the last battle. They then decide to keep an eye on Sephiroth.

When Jecht and Tidus confront each other, the Emperor halts them and tells Jecht that Tidus wishes to fight him out of hatred, which goes against their plan. Jecht departs and the Emperor battles Tidus himself, telling him he cannot find his Crystal if he fights for hatred. Shortly after, Golbez speaks to Jecht and questions his role in the Emperor's plan, implying the Emperor will ultimately betray his trust.

Later, Jecht learns the Emperor's true plan and refuses to assist him any further, and attacks him. Tidus and Firion witness the fight, and Tidus leaves to follow Jecht and fight him. The Emperor appears to Firion afterward and questions Firion's goal in comparison to his friends, who have abandoned him to fulfill their desires. When Firion says he wishes to end the war, the Emperor mocks him, and Ultimecia appears to battle Firion. Though she loses, both Ultimecia and the Emperor accuse Firion of being too weak to fulfill his dream, and tell him he is nothing more than Cosmos's tool.

In spite of the Emperor's words, Firion is newly inspired by Cosmos and continues on. The Emperor encounters Firion again at the Dimensional Fortress, taunting him by saying that his dream is too foolish to come to realization. The Emperor subdues Firion, but Tidus and Cloud arrive to defend their comrade. The Emperor flees, inviting Firion to come battle him alone and prove himself. The two meet in Pandaemonium, and battle, and Firion is victorious and claims his Crystal. The Emperor begins to fade, but taunts Firion about his goal to end the war once again, claiming his dream will be crushed and Firion will be begging for the Emperor's rule.

After Chaos kills Cosmos, the Emperor reveals Jecht's true nature as a former warrior of Cosmos, and that he manipulated Jecht to fight Tidus to create his own versions of the Crystals attuned to darkness rather than light. As the Crystals the Warriors of Cosmos gathered protected them, the "dark" Crystals the Emperor seized from Jecht will allow him to survive after Chaos destroys existence, leaving him reign over the remnants of reality and become the new god. Golbez confronts the Emperor on this, both of their schemes exposed, and Golbez claims that he believes the Warriors of Cosmos have the power to destroy Chaos and restore the worlds to their former state.

Later, the Emperor meets the Warriors of Cosmos and reveals how it was his plan (and to a greater extent, the plans of the other villains) that ensured they gathered the Crystals so Cosmos could be killed. By gathering the Crystals, Cosmos relinquished her power and died, finally breaking the cycle of war. The Emperor tells the warriors he will rule over existence after Chaos is killed. After Zidane, The Onion Knight and Cecil each defeat their nemeses, Kuja, the Cloud of Darkness, and Golbez, respectively, the Emperor attacks the warriors but is again defeated. However, he claims he will return once again as long as Chaos exists, and fades away with an anguished cry. Template:Endspoilers

Template:See Also The Emperor is described as a "Trap Master", and his arsenal consists of various traps, such as exploding mines and crests of energy which can paralyze the opponent. Most of his attacks, including his Flare HP attacks, allow the Emperor to continue moving and attacking to pressure the opponent, or give him time to charge up his signature Starfall attack. As a downside, his victory largely depends on the terrain and plane - in smaller areas his traps are more difficult to avoid, but in larger areas he has more room to lay said traps and for his Flare spell to track enemies. Most of his Brave attacks can be blocked or dashed through, and some can be reflected to damage the Emperor. Of particular note is that if the opponent uses a guard-crushing attack to reflect the Emperor's Flare, it will begin to track the Emperor himself instead.

The Emperor is fought in Destiny Odyssey I, II, and X, Shade Impulse, Distant Glory, and Inward Chaos. 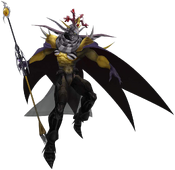 The Emperor's EX Mode is Power of Hellfire, where he takes on the form of the Emperor of Hell, his form when faced as the final boss of Final Fantasy II. His body becomes bulkier, his clothing is darker with more pronounced spikes, and his face and crown become demonic in appearance. While in EX Mode he gains the ability "Blood Magic", where any HP damage the Emperor inflicts on the opponent will be converted into HP for himself, in addition to gradual healing from Regen.

Retrieved from "https://finalfantasy.fandom.com/wiki/Emperor_Mateus/Dissidia_(PSP)?oldid=915110"
Community content is available under CC-BY-SA unless otherwise noted.