You have braved the bowels of Hell to reach me. But the hand of man, which deals in false justice and forsaken love, can never hope to defeat the lord master of Hell!

The dark half of the Emperor is the final boss of Final Fantasy II. He is faced on his throne at the top level of Castle Pandaemonium. Defeating the Emperor completes the game. He is simply known as "Emperor" in battle, but in the prototype Dark Shadow over Palakia, he is named Empire.

The Emperor is powerful and attacks relentlessly, similar to the Light Emperor. His physical attacks bear the same drain effect that Astaroth had, meaning every hit he lands will replenish his HP. He will attempt to inflict a handful of status effects on the party to hamper their attack, including Blind, Slow and Curse. His offensive magic arsenal includes the powerful Flare XVI and Starfall X, which hits the whole party. The Emperor resists all elemental attack magic and absorbs all status ailments.

It is advised to emphasize Evasion rather than raw Defense as the Emperor's extremely high attack power and number of hits can inflict major damage even to a character fully clad in Genji equipment, causing him to regain large amounts of HP while dealing massive damage to the party. All party members should be equipped with shields and preferably light armor. Blink is preferable to Protect, as it boosts evasion.

Berserk and Haste are important to cast on attackers to increase their damage output. The status effects the Emperor inflicts should be dealt with quickly, especially Curse, as its Defense drop leaves the afflicted vulnerable to being KO'd. Mages should use Holy, Flare, or Ultima to attack.

The Blood Sword is famously effective against the Emperor, draining at least 1/16th of the Emperor's HP, dealing more damage than most weapons. The Ancient Sword is also useful, as its Curse effect bypasses the Emperor's status protection and weakens his attacks and defenses. The Blood Sword strategy being as effective as it is may be an after-effect of an overflow bug that was never patched. The Emperor does not have the Undead flag that would have negated the Blood Sword.

The emperor of Palamecia covers all the world with darkness, using his army to try to make the entire planet his own. Even after death, he sets himself up as emperor over Hell itself.

Emperor appears as an enemy in Battle Music Sequences. His design derives from the Famicom version.

Returned from Hell with all its power, this fiend is simply as evil as they come.

The Emperor is fought in Palamecia Desert. He uses Knock Silly and Starfall and drops a Golden Spear. His design derives from the Famicom version.

The Emperor of Hell appears in game as part of the Series Boss Battles, representing Final Fantasy II. The Emperor's arsenal of attacks almost exclusively Fire attacks, most of which are not used in his original incarnation. His drain attack is also replaced by his human counterpart's Elixir supply.

The Emperor appears with an Ice-elemental card. His design derives from the Famicom version. 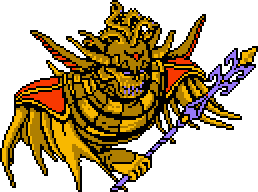 In the original Famicom version, the Emperor has a unique targeting byte for the final boss battle. This results in a bug when using the Wizard Staff as an item to cast Scourge XVI. The spell will target one random enemy or ally, but it does not exclude the Emperor's unique targeting byte, potentially causing the spell to target the Emperor despite him not being present (resulting in no effect). The Famicom version Emperor is the only final boss in the series where the characters do a victory pose after winning. This is changed in the remakes.

In the cutscene preceding the battle with the Light Emperor, where Minwu, Scott, Ricard, and Josef experience a vision of the battle, Firion used the Masamune on the Emperor, with Maria following up with Holy Lv. 16; the Emperor retaliating by casting Flare XVI on Maria; Guy using an Elixir on himself, Leon attempting to strike the Emperor down with the Excalibur and the Sun Blade, but missing him, and Guy and Maria following up with the Rune Axe and Yoichi's Bow, respectively; Leon casting Cure Lv. 16 to the party; the Emperor casting Starfall X, and Firion casting Ultima Lv. 16 on the Emperor in return.

In the GBA and PS versions, the Emperor's battle sprite has a lower half and torso, while in all other appearances he lacks these.

Starfall X in the Origins version.

Starfall X in the Advance version.

Curse XVI in the PSP version.

Flare XVI in the PSP version.

Slow XVI in the PSP version.