If you will not have eternal life, I will give you eternal suffering!

The light half of the Emperor is the final boss of Soul of Rebirth in Final Fantasy II. He is the heavenly counterpart to the Emperor of Hell fought in Pandaemonium.

The Blood Sword will be unavailable, unless the player gave it to Ricard before he died.

Starfall XVI targets the whole party, and hits for moderate damage. The Emperor uses Flare XVI frequently, alternating between this and his Starfall XVI attack. The Emperor sometimes casts Holy XVI or Blaze XVI on the whole party. He also repeatedly casts Dispel XVI to remove the party's elemental resistances. As with his dark counterpart, the Light Emperor's physical attacks have a draining effect to them, inflicting massive damage on the party while also healing himself.

If the player gave the Blood Sword to Ricard in the main game, the fight against Emperor will be a simple affair as sixteen hits at most will eliminate him. Dual-wielding it with Ricard's Wyvern Lance or Scott's Wild Rose ensures maximum accuracy.

If the player spent some time to level Ultima on Minwu (Lv8+) and acquired the Staff of Light or Stardust Rod to maximize his Spirit, Minwu on his own can deal massive damage to the Emperor casting Ultima every round. The other party members should be focused on defensive buffs and healing.

Otherwise, the party should be bolstered with buffs, such as Haste, Blink and Berserk. If Scott's Wild Rose has been obtained, it can be used to cast Berserk XVI on the entire party. Shell can help reduce the damage from his magic if magic defense of the party is low, and Barrier can reduce Blaze XVI damage and prevent Slow XVI from connecting if there are any characters missing Fire element and Body element resistance.

The Emperor's offense comes primarily from his magical attacks. Thus, it is important to have high HP and to have Minwu and/or Scott heal as necessary.

If Dispel was trained on Minwu or Ricard, it becomes possible to inflict status ailments on the Emperor if Dispel connects. Dispel must be very high level as the Emperor boasts impressive magic defense. If his Mind resistance is negated, the Ancient Sword can inflict Curse to make the fight much easier, as the party will inflict greater damage to the Emperor and receive reduced damage from his attacks.

Light Emperor is a DLC costume for the Emperor titled "Emperor of Arubboth", or simply "Arubboth". Despite being a heavenly being, the EX Mode for the Emperor while wearing this costume is still called "Power of Hellfire."

Light Emperor appears as a boss. 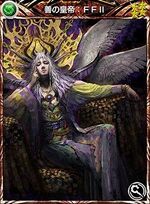 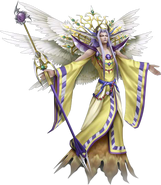