A maid who works for the emperor of Zoldaad, the empire that forever burns bright. A callous woman, in truth she is an expert at retrieving confidential information that she then shares with the rebel army opposing the empire, or with whomever pays enough money to procure it. Shine is actually one of the many false identities she has created over the years to carry out her business.

Emilia is a supporting character in Final Fantasy Brave Exvius. She is Amelia's younger twin sister[note 1] and a professional assassin. While working undercover she dons the alias of Shine and will do anything for the right amount of money.

A spy and expert at retrieving confidential information, her vision can be summoned by Rain and Lasswell to aid them in their battles.

Shine is a spy who decided to do away with emotional attachments, spawning her vision. She is often unable to recall her own upbringing. "Shine" is only one of many false identities she has created over the years to carry out her business. She works undercover in the Zoldaad Empire, posing as a maid for Sozhe, the emperor, and as a bar showgirl. She uses her numerous identities to gather intelligence, and then shares it with the Raven rebel army or whoever pays enough money for it.

With Sozhe's passing, and Shera's crowning as the new emperor, Shine disappeared. Shine is recruited by a traitorous cabal of politicians, led by Prime Minister Madal, who want Shera assassinated for he's a threat to their power and privileges.[1] She was hired since they believed Shine to be Amelia. The cabal instructs her to murder Shera via trap. In truth, Shera is already suspicious of this cabal and is spying on them for Amelia who had learned Emilia/Shine was hired and bribed her back. Emilia thus serves as a double-agent. Whereas Amelia would accompany Shera in the search of the stone for his crown, Emilia would travel with the Shera's Commandos to divert them to make it look like the plan was being carried out successfully while Amelia would protect Shera.

When the unit is suspicious and rushes to Shera's side, both parties are surprised to see two "Amelias". The twins explain the plot and the deception they had to play as Emilia happily claims to love her sister for paying her a large sum. Shera announces his final plan to procure evidence of Madal's crimes.

In a last attempt at power, Madal would have "Amelia" kill Shera directly while his forces terrorize the castle, making it look like rebels were responsible. Seeing the young man's corpse, Madal gloats at his victory. This becomes his downfall, as Emilia reveals her identity: Shera is alive as the blood and knife were fakes, and the explosive sounds that alerted Madal to the "success" of his plot were but a reproduction made by Riley. With evidence of treason for all to see, Shera offers Madal one last chance at redemption by admitting to his crimes, but he clings to his ambitions. Madal and his men are arrested.

During the coronation ceremony a remnant faction of Madal's followers attempts one final attack on Shera, which is thwarted by Jake, Ozetta and Emilia, the latter who is more than happy to help for she's on bonus pay.

She has two variants: "Shine" and "Emilia". They are 4–6★ rarity units with different means of acquisition. Whereas Shine can be obtained any time via Rare Summon, Emilia was an event-exclusive reward unit in "Conspiracy to the Throne" (during which she was also available as a guest in its stage "A New Era"). She can equip daggers, swords, bows, whips, throwing weapons, along with hats, clothes, and accessories.

She has an additional, Christmas-themed variant that she shares with her sister Amelia, "Holy Night Amelia & Emilia" (5–7★). 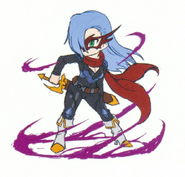