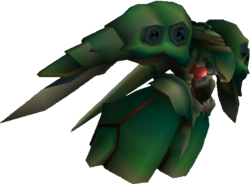 Emerald Weapon (エメラルドウェポン, Emerarudo Wepon?) is a recurring enemy in the Final Fantasy series. Originally appearing as a superboss in Final Fantasy VII, it has since made cameos in other installments as well. It is one of the Weapon creatures created by the Planet as its defense mechanism.

Emerald Weapon and Ruby Weapon are two superbosses first introduced in the North American release, and later appearing in all subsequent versions. Fought under the sea by ramming it with the submarine, it boasts the highest HP of any enemy in the game at a staggering 1,000,000, and is one of few fights in the game fought under a countdown, 20 minutes without the Underwater Materia. It attacks with powerful non-elemental attacks, the deadly Gravity-type Emerald Beam, and the powerful Aire Tam Storm. Defeating it yields the Earth Harp item, which can be traded for a full set of Master Materia with the Kalm traveler.

Final Fantasy VII Remake has a side-quest called "Corneo's Secret Stash", where Cloud and his party are tasked with finding Don Corneo treasury. One of them is the "Emerald Tiara"

, which is shaped after Emerald Weapon.

The still-frozen Emerald Weapon appears as an Easter egg, buried in Banora Underground. In the northern sections of the first area, "Depths of Judgment", Emerald Weapon's shoulders emerge from a large formation of crystal. The ridges and slots on the shoulders for Emerald's four orbs identify it, but the player is unable to move Zack or the camera in such a way as to see past the crystal.

Emerald Weapon lies beyond the map borders, and the player cannot get any closer to it other than this distant view. The same Emerald Weapon sighting might be encountered on background in mission 9-6-6, during the battle with superboss Minerva.

According to the Crisis Core Complete Guide, the Banora mining site was closed when Shinra discovered Emerald Weapon in stasis underground, and the village was built to hide the discovery with Shinra staffing it with residents.[1]

The Emerald Weapon is a Garlean warmachina. Like the Ruby and Sapphire weapons before it, the Emerald Weapon was reverse-engineered from the Ultima Weapon by the VIIth Imperial Legion and incorporates a synthetic auracite core containing combat data based on Gaius van Baelsar. 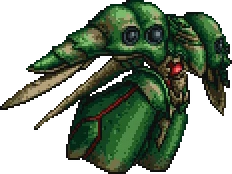 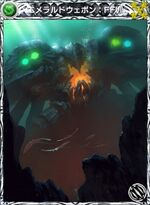