Elvoret is a boss in Final Fantasy VIII. Its appearance is similar to another monster called Elnoyle. It is a flying monster who lives on the abandoned communications tower outside Dollet. It could be considered the first proper boss of the game, since the Fire Cavern is a tutorial area. It is faced immediately after fighting Biggs and Wedge.

A monster that lives in the abandoned Dollet Communication Tower. No one knows where it came from.

Thunder
Cure
Double
Siren (only once)

Before Elvoret appears, Squall and his team must fight Biggs and Wedge. After a considerable amount of damage has been given, Elvoret will make its appearance by blowing the two Galbadian soldiers out of the battle.

Elvoret possesses the Siren GF, which the player must draw. If missed, the player must wait until the final dungeon to get another chance. Elvoret uses Storm Breath, a non-elemental attack, used every three turns and hits all party members. It also uses Fire and Thunder.

If possible, the party should try and stock as many Double spells as they can, as it will be a while until the player gets a chance to draw them again. The party can also draw-cast the spell, which may make healing faster. The player should have one Mag-J junction ability at this point from Quezacotl. It can be given to Selphie to boost her Magic stat, and use her for a healer and to doublecast magic at Elvoret. Ifrit should have the Str-J junction, which helps Squall or Zell dish out a lot of damage during their Limit Breaks.

Elvoret is a Level 6 Boss Card in Triple Triad used for playing the minigame and for turning into 10 Death Stones via Quezacotl's Card Mod. It is a rare result from Carding Bite Bug or Ochu.

The Demonolith enemy in Final Fantasy X features Elvoret in its design.[1] 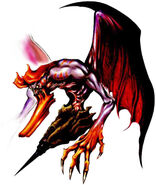