Cid Pollendina: Oh, shut up and help me remodel the Elvaan page!
Please expand this article into a full one. The following tasks need to be completed:This request can be discussed on the associated discussion page. Remove this notice upon completion.

Various
Elvaan are one of the Enlightened Races available for play in Final Fantasy XI. They inhabit the Kingdom of San d'Oria, and Elvaan players starting their game there are rewarded with a San d'Orian Ring. They are strong and have a high Strength stat, making them effective for physical classes (such as Monk) and high Mind, making them successful healers, such as White Mages. They are the most religious of the enlightened races, and also the most imperialistic.

The Elvaan resemble elves from German mythology and other common fantasy-type games. The Elezen from Final Fantasy XIV take after the Elvaan.

In the game's creation myth, the goddess Altana weeps over the destruction of the ancient Zilart race. Her tears clean away the wreckage and give rise to the five enlightened races. The god Promathia, disliking the existence of the new races, brings out their worst emotions. The Elvaan were cursed with arrogance.

The Elvaan reached the height of their influence after the Age of Magic, wherein the Tarutaru monopolized the practice of magic. After the secrets of magic usage became available to the other races, even the beastmen, the Elvaan developed powerful orders of knights. Elvaan influence expanded, until they went at war with Bastok and Windurst. Windurst allied with their enemies, the Yagudo, who were displaced by Elvaan imperialism. Bastok, with Hume ingenuity, invented firearms that gave them an advantage. The Elvaan's defeat at the Second Battle of Konschtat marked the end of this era, called the Age of Power.

The following table shows the level 1 statistics for each class a Elvaan can take, keeping in mind that the difference in attributes between each race is quite negligible, and any of them will be able to do any job competently as long as they are geared well: 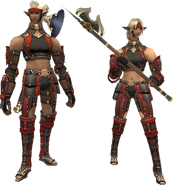 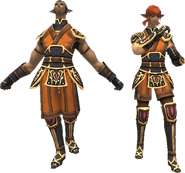 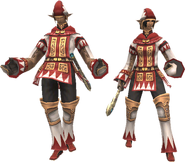 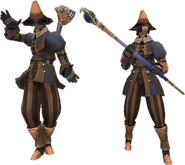 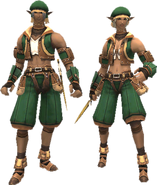 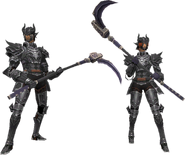 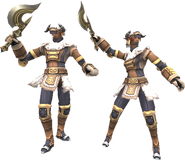 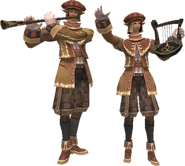 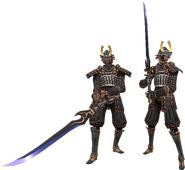 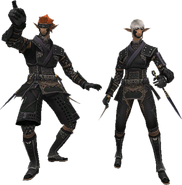 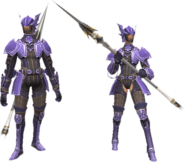 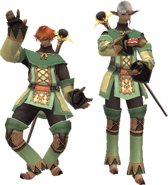 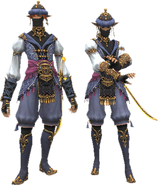 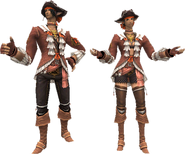 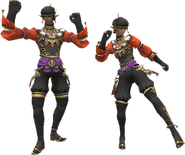 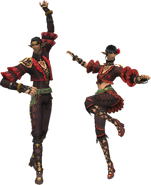 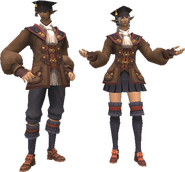 Prishe appears as a Warrior of Cosmos. She was initially considered for Dissidia Final Fantasy, but was rejected in favor of Shantotto.

The Elvaan is one of the playable races.

The Elvaan character design was done by Tetsuya Nomura.

Facial sketches for the Elvaan.