"A warrior of the Youth League. She wasn't planning to fight Yuna, but she certainly seems to be enjoying the challenge."

Must side with Youth League. Unavailable after completing Den of Woe

"A warrior of the Youth League. She is Lucil's most promising pupil, demonstrating great prowess in battle. She can get a bit hyper from time to time."

Must side with Youth League. Unavailable after completing Den of Woe

I am a captain, after all. Don’t wanna set a bad example by running away!

Elma is not that much of a threat to deal with, though her biggest threat is her Haste spell. The party should focus on taking out her companions first before targeting Elma herself. If anyone's HP falls below 300, one should heal with a Hi-Potion. If anyone has learned the Songstress ability Sleepy Shuffle, it will make this fight even easier, since Elma is not immune to the Sleep status.

Awright, it’s Elma time! Lady Yuna, give me all you’ve got!

This battle is much more difficult in comparison to the first battle. Elma now uses all four -"ra" elemental spells, so if possible, one should aim to equip any dressphere, Garment Grid, or accessory (preferably Force of Nature) to absorb elemental damage. Having a captured fiend that knows Tetra Eater (e.g. Jahi) is also useful. It's not worth casting positive statuses, as Elma simply dispels them. In addition, Elma can confuse, blind, and silence the party with Confuse, Flash Bomb, and Hush Grenade, respectively, and can steal MP from a character with Osmose.

It is also best to not use any heavy magic-using dresspheres (Black Mage, White Mage, and Gun Mage in particular) since there is a great chance of them being silenced by Hush Grenade. Equipping the Mascot dressphere or employing a fiend that knows Ailment Def. helps to block the Silence effect of Hush Grenade. If Elma uses Not-So-Mighty Guard, one should counter with Dispel or Crackdown on Elma.

Elma is an optional boss in the Fiend Arena in the Youth League Tournament. She is fought either by herself or together with Yaibal and Lucil. She is much tougher than in the story, as she now has 62,000 HP and access to new and more powerful abilities, including Supreme Gem (major non-elemental damage to the party), Clean Slate, Gold Hourglass (inflicts Slow on the entire party), and Fireworks (major physical damage to the party that ignores defense). However, she can no longer dispel and silence the party, making magic useful against her again.

When defeated, she drops two Shining Gems or two Supreme Gems, the latter of which are needed to teach a creature Ultima.

Employing high-level creatures that know powerful abilities like Fireworks, Black Sky, Meteor, and/or Ultima is useful as these spells are capable of doing serious damage to Elma at high levels.

If the player hands over the Awesome Sphere to the Youth League, they can then recruit Elma into the party from Chapter 2 onwards using a Trap pod SP in Mushroom Rock Road until the Den of Woe's events are completed. 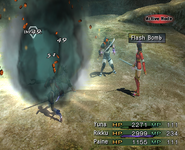 Flash Bomb.
Add a photo to this gallery

Retrieved from "https://finalfantasy.fandom.com/wiki/Elma_(boss)?oldid=3282028"
Community content is available under CC-BY-SA unless otherwise noted.