Lancer
Eline Roaille, also known as Eline the Razor, is a non-playable character from Final Fantasy XIV. As Flame Marshal of the Immortal Flames, she is the right-hand woman of General Raubahn Aldynn.

Eline was appointed Raubahn's second-in-command when the Immortal Flames were reinstated to combat the Garlean threat and Project Meteor. Much as how Raubahn was an Ala Mihgo refugee who made his wealth in Ul'dah, Eline was a foreign mercenary originally hailing from the Holy See of Ishgard.

In the events of Patch 2.4: Dreams of Ice, it is revealed she was the Garlean spy known as "the Ivy" and had been selling out information since the beginning. Through the course of events, its discovered she was acting as a triple agent, providing intel not only to the Garlean Empire, but the Monetarists of Ul'dah and the heretics serving the Dravanian Horde. The capture of a merchant in her employ in Coerthas would lead to her downfall, as both the Crystal Braves and the Ishgard Temple Knights unraveled the vines.

She is initially captured in the East Shroud during a meeting with a correspondent from Castrum Oriens. However, while the Scions were dealing with the threat of the Primal Shiva, Roaille had escaped custody and attempted to flee to Castrum Meridianum. Ilberd defeated her associates at the Garlean garrison and captured her again. She protested how she had clawed her way out of the underbelly of Ishgard society by stealing, killing, and even whoring herself, building hatred towards the Ishgardian nobility in the process. She then questioned Ilberd how he was any different than her, to whom he replied that he only sold his sword, but she sold her comrades. She was taken back to Ul'dah.

Raubahn later spoke with Alphinaud and Ilberd about her betrayal and spy network. He concluded she must have aided Gaius van Baelsar in getting the XIVth Imperial Legion's strongholds throughout Eorzea set up. Ilberd reveals she may have answered to a higher authority in Garlemald. Since the late Solus zos Galvus had endorsed Nael van Darnus's use of Project Meteor, they conclude she must have been planted by Varis sae Galvus, who had recently been crowned Garlean Emperor. Ilberd revealed she had been double dealing, secretly working for Monetarists in addition to the Garleans, much to Raubahn's shock. Alphinaud wondered then why she was aiding Lady Iceheart's heretics, as neither the Garleans nor Monetarists seemed to have anything to gain from aiding the Dravanians.

Eline is seen as committed to Ul'dah and the Immortal flames but is secretly a triple agent for the Garlean empire, the moneterists, and the heretics serving the Dravanian Horde. She has a hatred for the Ishgardian nobility as she did everything in order to survive poverty in Ishgard. 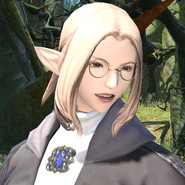