(エルフの国, Erufu no Kuni?, lit. Land of the Elves)

Elfheim, also known as Elfland, is a town in the original Final Fantasy. Located southwest of Cornelia, it is the home of the elves.

The prince of the elves is put into a deep sleep by Astos, the king of the dark elves. As the Warriors of Light, the party is asked by the kingdom of Elfheim for their help in order to defeat Astos. After they defeat Astos at the Western Keep and get an herb from Matoya to awaken the prince, he responds by giving them the Mystic Key, allowing them to get the explosives from Cornelia to give to the dwarves.

The background music that plays in Elfheim is Final Fantasy's "town theme."

Elfheim is an elven kingdom ruled by Frey, the Mysterious Old Ranger.

Elfheim and the Elven Castle appear as ruins in World B, lying atop a small hill overlooking the region. In Confessions of the Creator a teleport stone lies here, and in some storylines a moogle sells items here. The entire southern region of World B is a snowfield called the Elven Snowfields after the city and castle.

In the WonderSwan, GBA, PSP, iOS, and Pixel Remaster versions, the left gravestone in Elfheim reads "Here Lies Link." This is a reference to Nintendo's The Legend of Zelda, as Link has an elf-like appearance. The elves in Elfheim have a striking resemblance to Link from The Legend of Zelda as they wear green tunics, green hats, and have yellow hair. In the Final Fantasy Origins version, the gravestone reads "May Erdrick rest in peace". In the English localization of the NES version of the game, the aforementioned tombstone says "Here lies Erdrick." Erdrick is a reference to a character in the Dragon Quest series. In the original Japanese Famicom version the tombstone has always been for Link. Coincidentally, the Japanese Famicom Disk System version of Zelda II: The Adventure of Link included a reference to Erdrick on a tombstone in Saria Town, but it ended up omitted from the English localization. 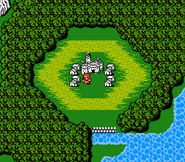 Elfheim on the World Map (NES).

Elfheim on the World Map (PS).

Elfheim on the World Map (GBA).

Elfheim on the World Map (PSP).

The ruins of the Elven Castle and surrounding Elven Snowfields in World B in Dissidia 012 Final Fantasy.

[view · edit · purge]"Álfheimr" is one of the Nine Worlds of Yggdrasil in Norse Mythology. Álfheimr was inhabited by the light elves, and the name of the world literally translates as "elf home."

[view · edit · purge]An elf is a type of supernatural being in Germanic mythology and folklore. Reconstructing the early concept of an elf depends almost entirely on texts in Old English or relating to Norse mythology. Elves entered the 20th-century high fantasy genre in the wake of works published by authors such as J. R. R. Tolkien.