Final Fantasy Wiki
Register
Don't have an account?
Sign In
Advertisement
in: Characters in Before Crisis -Final Fantasy VII-
English

You found me when I was wandering all alone, without my memories. I was raised by AVALANCHE. You're all like my family. That's why I'm going to fight with everyone and repay my debt.

Elfe, born Felicia (フェリシア, Ferishia?) is the leader of AVALANCHE, an eco-terrorist organization dedicated to the preservation of the Planet and the destruction of the Shinra Electric Power Company in Before Crisis -Final Fantasy VII-.

A skilled warrior who wields an unnamed katana in battle, Elfe's most notable trait is the broken Materia embedded in her arm which gives her the power to take on warriors such as Sephiroth. However, unbeknownst to her, the Materia drains her life energy to compensate for its broken state and will eventually kill her if it is not removed.

Elfe has short brown hair and blue eyes. She wears a frayed white cape and a green jacket and cropped trousers fastened with many belts and buckles. She wears combat boots and blue gloves.

Surprisingly non-charismatic for a leader of an eco-terrorism organization, Elfe is reserved, although this might be due to the lethargy caused by the Materia draining her energy. Elfe cares deeply for the well-being and morale of the organization's members. Her attachment to the organization is due to her amnesia preventing her from recalling anything before being taken into the group, and as such she regards AVALANCHE as her only remaining family.

Elfe was born as "Felicia" (フェリシア, Ferishia?), the daughter of Turk member, Verdot, and an unnamed woman in Kalm. Living in a happy family, Felicia loved her father and played with him during his visits home. During a bombing operation north of Kalm, a communications error resulted in the bombing of Kalm itself. Felicia and her mother were among the victims and Felicia's mother was killed. Because of his job, Verdot became responsible for the cover-up surrounding the incident, which included the transportation of all of the town's injured to Nibelheim where they were to be "treated" by Professor Hojo in the Shinra Manor.

Unbeknownst to Verdot, Hojo took this opportunity to experiment on the injured, including Felicia, whom Hojo reported to have died. Experimenting with embedding Materia into humans, Hojo implanted the Zirconiade Materia into the back of her hand. Unable to get the results he wanted, Hojo declared the experiment a failure and ordered Felicia's body to be destroyed. Still alive but suffering from amnesia, she was saved by Fuhito and brought to Cosmo Canyon where she took on the name "Elfe" and became a member of AVALANCHE.

Despite Hojo's designation of the experiment as a failure, the procedure granted Elfe enhanced physical capabilities, and she became a powerful warrior. After the leader of AVALANCHE died, Elfe was elected to take his place, with Fuhito acting as her intelligence commander.

Some time later, after moving operations to Midgar, Elfe and Fuhito were accosted by a gang of thugs led by a man named Shears. After seeing Elfe take on one-hundred of his men easily, Shears, admiring her strength and beauty, had himself and his men join Elfe on her mission to destroy the Shinra Electric Power Company. As time went by, Shears became Elfe's battle logistics commander and devoted himself to looking after her well-being.

Elfe is first encountered by the Player Turk during AVALANCHE's first attack on Junon. Following a series of attacks against Midgar's Sector 8 mako reactor, and an assassination attempt on President Shinra himself, Elfe leads an attack on Junon's Mako Cannon intending to use it to destroy Midgar.

Discovering a dozen AVALANCHE members slaughtered within the facility's halls and believing the Player Turk responsible, Elfe attacks to avenge her comrades, but she is stopped by Sephiroth, who had been sent by President Shinra to personally wrest control of the cannon from AVALANCHE. After briefly clashing, Sephiroth compliments Elfe on her strength while Elfe questions him on his motivations for fighting. Considering Sephiroth's presence too risky to the lives of her men, Elfe orders AVALANCHE to withdraw from Junon and leaves while Sephiroth ponders his reasons for fighting for Shinra.

While Fuhito continues his projects, which involve furthering his research into creating AVALANCHE super-soldiers known as Ravens, Elfe remains behind until it is learned a living descendant of the Cetra is living in the Midgar Slums. Infiltrating the Sector 5 Slums to meet her, Elfe, Shears and Fuhito attempt to persuade her to divulge the location of the "Promised Land" only to have the meeting interrupted by an eavesdropping Player Turk. Having to withdraw after suffering a sudden bout of weakness due to the Materia within her, Elfe is troubled by how the Cetra descendant had mentioned an ancient voice emanating from within her and how Fuhito had attempted to deflect the conversation.

Elfe, Fuhito and Shears are later encountered as the Player Turk infiltrates their base in Wutai, and, after the Turk demolishes the pagoda, the trio is seemingly defeated. The defeated trio turned out to be disguised Ravens and the commanders used Shinra's false sense of security to infiltrate the construction site of Shinra's new Mako Reactor in Mt. Corel.

Luring the Turks into the facility, Fuhito attempts to not only kill the Turks but also AVALANCHE's financial benefactor and informant, Rufus Shinra. As Elfe informs Fuhito of the troops' readiness, Verdot, who had followed Rufus to the facility to arrest him, recognizes her voice as his daughter's and triggers a memory relapse in her, which causes the Materia within her to become erratic, weakening her further. As Fuhito takes Elfe away, Verdot abandons the Turks to chase after her.

As three years pass and the Player Turk awakens from a coma induced by the incident in the Corel Reactor. Elfe has become gradually weaker to the point she has deferred leadership to Fuhito. Verdot, assisted by Shears who had been betrayed and left for dead in the reactor by Fuhito, has been searching for information on Elfe's whereabouts and on her ailment, which seems to be coming from her Materia. Intending to cure her in loyalty to their chief, the two men are assisted by the Turks in spite of their fugitive status.

This assistance causes Shinra to label the Turks as traitors and security risks, inciting their own fugitive status and execution orders. It is by chance that the Turks see Elfe, now limp and weak due to the Materia, when Fuhito comes to Midgar to summon Zirconiade. Stealing the support Materia the Turks were gathering to save her, Fuhito combines them with the Materia in her hand to awaken the summon.

As the Player Turks turn to stop the summoning, Shears attempts to take Elfe some place safe, but she wants to return in spite of her physical weakness to fight the monster she had caused to be created. Shears offers to achieve this repentance for her and sets her back to rest before following the Turks to fight Fuhito and Zirconiade.

Having had to rescue Verdot after he was captured by Scarlet, The Turks Tseng, Reno and Rude arrive with Verdot to where Elfe lay. As father and daughter are reunited, the group is ambushed by Shinra troops. Faced with the potential execution of all Turk operatives, Tseng is offered the choice of executing Elfe and Verdot to save the lives of his comrades. Drawing his gun, Tseng shoots down first Elfe, and then Verdot, in front of the Shinra troops.

Believing them dead the Shinra troops let the shocked Turks go and Elfe and Verdot are gathered in the back of a truck where Tseng, claiming to wish to be with his chief until the end, accompanies them back to Midgar to be disposed. In actuality, thanks to the machinations of Rufus Shinra after he made a deal with Tseng, Elfe and Verdot are secretly attended to and dispatched away from Midgar's reach to live a peaceful life together away from the conflict.

Elfe is fought as a boss in Before Crisis Chapters 3 and 14.

While the theme is set to represent Elfe, it also plays during heartache scenes in the game; such as when Chelsea decides to no longer see Rude and when Zack's friends, Essai and Sebastian, are laid to rest. "Theme of Elfe (Angel)" is also used during the game's initial ending following the final boss battle.

Elfe appears as an Ice-elemental card.

Elfe bears minor similarities to Lightning, who poses similarly to Elfe's picture (as seen above). The two also bear a moniker. 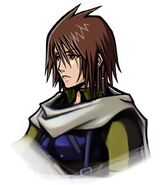 Elfe in Before Crisis.

Young Elfe in Before Crisis.

Elfe in Before Crisis opening.

Elfe in Before Crisis opening. 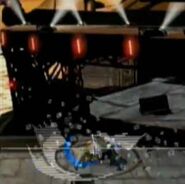 Elfe versus Sephiroth in Before Crisis.

Elfe is the French word for "elf". [view · edit · purge]An elf is a type of supernatural being in Germanic mythology and folklore. Reconstructing the early concept of an elf depends almost entirely on texts in Old English or relating to Norse mythology. Elves entered the 20th-century high fantasy genre in the wake of works published by authors such as J. R. R. Tolkien.