The Elezen are a characteristically tall people, long of limb and slender of build. They are also possessed of a somewhat extended lifespan in comparison to the Hyur. The Elezen once claimed sole dominion over Eorzea, their presence predating that of the other races, and, as such, developed a heightened sense of honor and pride. In years past, the Hyur migration into Elezen lands sparked bitter conflict. At present, however, the mutual understanding reached between the two races allows them to work towards mutual peace and prosperity.

The Elezen is a race from Eorzea in Final Fantasy XIV whose members have lived on the continent the longest and co-exist peacefully with the other races. They are similar to the Elvaan of Final Fantasy XI. The Wildwood/Forester tribe live in the forest but also adapt to urban life, and are excellent archers due to their keen eyesight. The Duskwight/Shader Elezen live in caves, and see the Wildwood as traitors. Duskwight have excellent hearing and are skilled in hand-to-hand combat, and many act as thieves.

The Elezen can lay claim to being the oldest of Eorzea's native sentient races—various city-states over multiple Astral Eras have been founded by them, and there is significant evidence to suggest that the ancient, mighty Allagan Empire may have been substantially driven by the Elezen's distant forebears. In modern times, while a few Elezen can be found all across Eorzea, their greatest populations are in Gridania and Ishgard. Elezen were instrumental in Gridania's founding and are responsible for many of the traditions of its greatest institutions, such as the Archer's and Conjurer's Guilds. Their long attachment to the Black Shroud and understanding of the elementals who truly rule that forest mean that they will be a crucial part of Gridania, as long as it endures.

The Elezen's characteristically tall, slim physiques and elongated limbs are part of a successful adaptation to the land's various environments. It is said that their highly sensitive ears can discern the squeak of a field mouse at a distance of up to several malms.

For eons, the Wildwood Elezen have lived in the safety of Eorzea's lush forests. They have an excellent sense of sight—a contributing factor in their unparalleled expertise as archers. With the formation of the realm's governments, many Wildwood were drawn either to the exhilarating cosmopolitanism of the urban centers or the simple nomadism of the plains.

The other great population of "Wildwood" Elezen is to be found in Ishgard, but long decades of ceaseless warfare with the Dravanian Horde, the intensity of the faith of the Church of Halone, and most recently the years of bitter cold and snow, have made the Elezen of Ishgard culturally distinct from their other Wildwood cousins.

The Duskwight Elezen have spent centuries in the peace and seclusion of Eorzea's caves and caverns. They have developed an acute sense of hearing, capable of detecting the faintest of sound. The uncanny awareness this grants has proven advantageous in the field of hand-to-hand combat. Many of the reclusive Duskwight resort to robbery and pillaging to survive, earning them the scorn of their woodland relatives.

There are also Duskwights living in Dalmasca, such as Gilbrisbert quo Buteo.

Elezen names resemble French names, such as that of Louisoix Leveilleur.

The Elezen are a traditionally nomadic people who in former times claimed sole dominion over Eorzea, their presence predating that of the other races. Believing this prominence to be ordained by the gods, they came to develop an esteemed sense of honor and pride.

The Elezen perceived the immigration of the Hyur as tantamount to invasion, and as a result the two share a past plagued by warfare. At present, however, they coexist peacefully, the exception being the reclusive Duskwight Elezen.

The following table shows the attribute modifiers for Elezens. These are flat modifiers and do not scale with level, only making a noticeable difference at low levels and very quickly becoming negligible as these attributes climb into the hundreds and thousands.

Completing the Adventurer from Another World collaboration quest yields the player Eorzean-themed attires for the party, including the Glamour Prism: Elezen for Ignis Scientia. 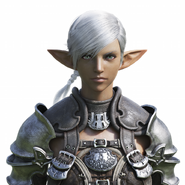 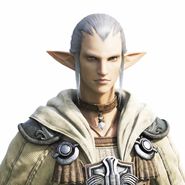 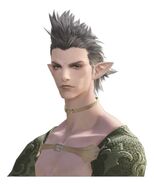