I'm the newest member of the Turks, Elena. Thanks to what you did to Reno, we're short on people.

Elena is a member of the Turks in the Final Fantasy VII series. A new member to the organization, she is inexperienced but takes her job seriously compared to Reno and Rude, and wants to do her best and prove herself. Her clumsiness acts as comic relief in the original Final Fantasy VII. Elena has also appeared in Before Crisis -Final Fantasy VII- and Final Fantasy VII: Advent Children.

Elena is a young woman with a small stature, brown eyes, and neck-length blond hair that is longer on one side. In most of her appearances, she wears the standard Turks' uniform of a dark blue or black suit over a white shirt and black tie. During her school years in Before Crisis, Elena's long hair is tied into pigtails and she wears a red school uniform and a black miniskirt.

Elena has a clumsy and chatty personality. As the new recruit, she is very serious about her job but her clumsiness often gets her into trouble. She can be reckless as she tends to do whatever she thinks is right without considering the consequences. Despite this, Elena is loyal to her colleagues and highly determined to succeed and surpass her elder sister. She is smart and talented, having attained the highest grades in school. She has a crush on Tseng, the leader of the Turks.

Elena is a high school student whose father teaches in the Shinra Military Academy. Her older sister is a member of the Turks. Elena resents her sister for outperforming her, and vows to never never join the Turks as long as her sister is a member. Elena has a part-time job where she works as a bartender in Wall Market of the Sector 6 Slums.

At first, she followed in her sister's footsteps and trained with firearms; however, she eventually dropped the weapon classes to remove herself from her sister, and began practicing martial arts instead. She achieved five "Elite Emblems" at the Shinra Military Academy, only given to students who hold the highest exam scores, obtaining the most Elite Emblems in the school and solidifying her status as a prodigy.

Despite her clumsy nature, Elena is highly skilled with both weapons and martial arts. When she observes three Ravens dispose of SOLDIER members and steal their uniforms, she considers telling the Turks, but instead takes on the responsibility herself, following them until she loses track. She is later kidnapped for being a witness and is held hostage on a train. Elena drops one of her Elite Emblems on the train, alerting the infiltrating Player Turk that she is on board. Elena tasks herself with attacking a Raven as the player arrives, but the Player Turk trades the Support Materia for Elena. After being saved, Elena vows to become a Turk and surpass her sister. Afterward, the Player Turk uses Elena's private training area as a hideout from AVALANCHE for a short time.

Elena is the newest recruit, appointed to the Turks after Reno sustained injuries battling AVALANCHE in Midgar. She introduces herself to the party in the Mythril Mine, where she slips and accidentally reveals their orders. She later joins Tseng and Reno at a bar in Junon during Rufus's inauguration parade.

In Gongaga, Elena is annoyed that Reno and Rude always talk about who they like or don't like. Reno is surprised when Rude tells him that Elena likes Tseng, the leader of the Turks. She and Tseng later explore the Temple of the Ancients, where he asks her out to dinner. Sephiroth attacks and severely wounds Tseng after Elena leaves to report to the President. She later blames the attack on Cloud and confronts him in Icicle Inn.

Elena, Reno, and Rude spend their vacation at Turtle's Paradise in Wutai Village, but have orders to capture Don Corneo, who has been spotted in the area. Reno and Rude ignore their orders and Elena storms off angrily, only to be kidnapped by Corneo himself. Reno and Rude cooperate with AVALANCHE and save her and Yuffie. Elena, Reno and Rude later confront the party for a final battle in the Midgar subway, but it is possible to talk them out of fighting if the party worked with them in Wutai. Disillusioned with Shinra, the Turks abandon their mission.

It is revealed in Before Crisis that during Meteorfall, Elena helps evacuate Sector 3 of Midgar while Reno clears Sector 4 and Rude clears Sector 2. Moving to clear Sector 5 together with Tseng, the four are met and assisted by the previous Turks and former leader Verdot.

Final Fantasy VII The Kids Are Alright: A Turks Side Story[]

Elena spends the next two years residing in Healen Lodge alongside her colleagues and Rufus Shinra. She works with remnants from Shinra's scientific research and chemical engineering departments to develop a stimulant for patients plagued with Geostigma. Despite leading the project, she is bored and frustrated with a quiet life and jumps at any opportunity for more physical work.

After catching Thropp and Fabio Braun in their attempt to steal medicine for Fabio's younger brother, Bits, Elena hunts down the thieves and brutally tortures them. However, she comes to understand Fabio's motivations for stealing the medicine and hands it to Bits with instructions on how much of the medicine he should consume.

Rufus sends the Turks on a mission to find Jenova. At a beach house in Under Junon, Elena and Tseng run into Kyrie Canaan and learn of her and Evan Townshend's plans to travel to Nibelheim. Tseng decides to use Evan and Kyrie in their search for Jenova, but the pair attempt to get away as they want nothing to do with the Turks after learning of Fabio's death. Elena warns them to stop before shooting Evan in the shoulder. Reno scolds her for her recklessness and she is later forced to apologize to Evan.

After a brief stop in Nibelheim, Elena and Tseng take Evan and Kyrie to their next desired destination, Icicle Lodge. They encounter Kadaj who is also looking for Jenova, and chase after him. Reno and Rude arrive in Icicle Lodge to help them, and while tracking down Kadaj, Tseng orders his three subordinates to open fire. They hesitate as Evan might be struck. Kadaj finds Jenova in Evan's hands and attempts to grab it, but Evan kicks it into the lifestream, prompting Kadaj to jump in after it. Elena and Tseng would later find Jenova in the Northern Cave, but are captured and tortured by Kadaj, Loz, and Yazoo.

Elena is recovering from her ordeal at the hands of the remnants of Sephiroth. She joins Tseng to save Rufus Shinra from falling to his death after he launches himself off a building edge to destroy Jenova's head. She assists Reno and Rude fend off Yazoo and Loz as they chase after Cloud down the highway. Elena tosses a ladder down to Reno and Rude during the chase after Yazoo destroys their helicopter and has them board the one she is on with Tseng. When Rufus's Geostigma is cured, Elena is by his side with the other Turks.

As a member of the Turks, Elena fights along with her partners, Turks:Reno and Turks:Rude. Although Reno and Rude are fought at least once in mandatory battles, the battle at Sector 8 of Midgar is optional if the player completed the Wutai sidequest. This will give Elena a sense of attachment to the party, which will let the player opt out of the battle, and thus the player does not have to fight her. 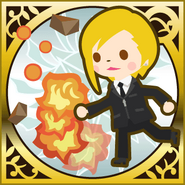 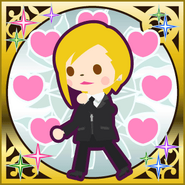 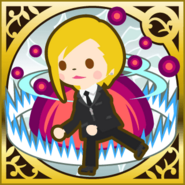 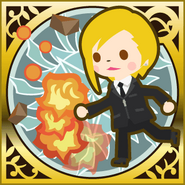 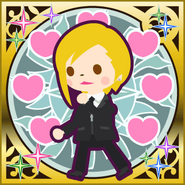 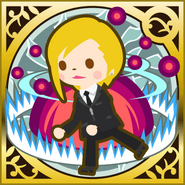 The newest member of the Turks, appointed after Reno was injured fighting AVALANCHE in Midgar. Elena has a bad habit of spilling important secrets, but she makes up for it with unrivaled dedication to her task, often in stark contrast to her less disciplined "superiors."

Elena is a playable character who could be initially recruited during the Challenge Event Masters of the Planet as a First Time Reward for completing the event's Wutai - Da-chao Statue stage on Classic difficulty. She also occasionally appears in dedicated Final Fantasy VII stages as a boss.

In the beginning of the second trailer, and one of the newly done scenes for Final Fantasy VII: Advent Children Complete, the view of a bloody Tseng and Kadaj's gang firing at them is from Elena's point of view.

When Kadaj confronts Rufus, and holds up Tseng and Elena's bloody ID cards, her ID number is 077.

She was voiced by Bettina Bush in the English version.

Concept art in Before Crisis.

Young Elena in Before Crisis.

Elena in Before Crisis.

Elena and Yuffie being captured by Don Corneo.

[view · edit · purge]Elena is a Greek, Slavic, Spanish, Romanian and Italian version of the ancient Greek name Helen/Helene. It means "light". Her name was initially translated as Yrena as depicted in few official data books releases, such as Final Fantasy VII Official Establishment File, which include names romanization.[1]

The Japanese name is Irina, which is the Russian form of the Greek name Eirene, which means "peace".