Karen Lewis
Elena, also known as Starlight Elena, is a summonable vision and an optional playable character in Final Fantasy Brave Exvius. She is a global-original unit and has two CG limit bursts. Elena is the first global original version unit to have not only a CG animated Limit Burst but also the only unit in all versions to have an English-voiced animation. She has since been released in the Japanese version of the game.

Elena is a young fair-skinned woman with long blue hair. She wears a black blouse, white pants and white heels. She wears a jacket wrapped up around her like a cape. She wears a pair of white gloves and dons her sword Astraea as a crystal in her left arm.

Elena is courageous, decided, and righteous, seeking to protect the weak and defend justice around the world. As the Warrior of the Crystal she has made it her mission to fight evil. She treats her Astraea with kindness, viewing it as a partner rather than as a mere tool for her quest.

Elena is the protagonist of a graphic novel known as Fundamental Forces or "FF" for short, authored by Miles L. Maul, which has wide popularity in Paladia. In the latest volume Elena encounters Morgana, a powerful sorcerer, deluded into thinking she is the embodiment of virtue itself who has made it her mission to create a virtuous empire by purging all she deems flawed. She started a genocide on a local town filled with poverty and crime, which in her view was sinful.

As a wounded girl cries in despair revealing Morgana killed her mother, the mad witch attempts to kill her for not acknowledging her "justice". Elena blocks her attack and challenges her. Morgana sends her henchmen to deal with Elena who battles her way through the knights, realizing Morgana has manipulated them into becoming her loyal minions by feeding them with nonsensical prattle about making her utopia a reality.

Next, Elena rushes at Morgana who has started to blast the city with magic intending to eradicateit. She demonstrates her might much to Elena's surprise, and reveals it is the power granted to her by her Dark Crystal, to which she boasts she was chosen as rightfully to wield, and by proxy makes her the proper ruler to enforce her vision.

Elena calls her out on her selfishness, to which Morgana answers by summoning monsters from her crystal. Elena realizes that Morgana is behind the dragon that attacked another village. Morgana reveals the previous holder of the Dark Crystal shared her vision of creating a utopia with its power, and declares her right to build an empire by ridding the world of everything she deems evil.

As Elena is surrounded by monsters, Morgana mocks her as a false hero. Elena admits she cannot beat her as she is now, but as she voices her conviction to defeat villains like her and envelop the world in light, she draws more power from her crystal, destroying the monsters one by one. Morgana is astonished that her crystal powers are being nullified and notices the crystal used by Elena, who introduces herself as the Warrior of the Crystal.

Elena grows desperate at the many monsters Morgana can summon while the latter is furious upon discovering she is not the only one blessed with crystal powers. Destroying Morgana's dragon at last, Elena confronts her directly. The crystal bearers fight with Elena defeating Morgana by using her Light of Salvation. Morgana refuses to accept the outcomes as she still clings to her delusions by referring to a boy she saved that claimed she was what was right in the world. Desperate, Morgana blasts her way through, escaping while promising to face Elena again.

Still surprised that something like the Dark Crystal could exist, Elena tries to help the townsfolk while vowing to purge darkness from the world.

The volume concludes with a mysterious entity who has observed the battle claiming the encounter between the two is just the beginning of the end.

In an ending scene, Elena is shown saving a person from a monster attack. This scene is displayed differently from her Fundamental Forces narrative, and is without the comic book decorations, suggesting that Elena is not a mere fictional character. The novel being written by Miles L. Maul has given players credence to believe that it was written by Elmaul, the wisest scholar of all of Paladia.

Elena is a 5★ base rarity unit that can be upgraded to 7★, while her roles in combat are hybrid damage and support. Elena has affinities for the Light, Water, Lightning and Ice elements, with players considering Light as her main element despite no inherent superiority in her arsenal for it. Elena is a reasonably powerful hybrid unit who can stack modifier boosts on her abilities to deal greater damage. She is fairly utilitarian and capable of bestowing buffs to the party while not completely ignoring her damaging role.

Elena is noteworthy her prodigious bulk, having generally high HP, DEF and SPR boosts. Since she can easily cap her ATK and Equipment ATK boosts, allowing her to equip extra defensive equipment, making her easy to build for survival and overall decent offensive. Elena's main weakness is her low imperils, requiring some external aid to maximize her damage potential.

Her Super Trust Master Reward, the Warrior of the Crystal, provides massive boosts to ATK/MAG, as well as Equipment ATK/MAG, making it a highly sought materia for its flexibility.

A radiant blue crystal wielded by the Warrior of the Crystal. The Astraea crystal was a gift to its original owner, who refers to it as "partner," from a friend she holds very dear. Mounted on a special custom-made gauntlet, the crystal can channel its energy into the shape of a blade when its wielder so commands it. However, said wielder must first be worthy of Astraea's favor before they ever hope to wield its power.

Elena's Trust Master reward is the Astraea sword which increases ATK +170, MAG +145 and has the effect of being a two-handed weapon.

Elena's Super Trust Master reward is the Warrior of the Crystal passive special ability which increases ATK/MAG (60%) and increases equipment ATK/MAG (50%) and accuracy (25%) when single wielding any weapon.

Elena's stats at her highest levels are as follows (with no passive abilities taken into account), along with the maximum amount of stat points that can be increased through pot-enhancements:

Elena has innate resistances to the following elements and status ailments:

A radiant crystal wielded by the Warrior of the Azure Crystal. The crystal's light can be used to protect the world from evil, and thus the warriors who come to wield it continue passing it down to younger generations to keep the world safe. Mounted on a special custom-made gauntlet, the crystal can channel its energy into a set of matching blades for the wielder, but only the warriors chosen by the Crystal itself can awaken its true potential.

Neo Vision - No. 8307: The protagonist of a graphic novel well-known throughout Paladia, and the Warrior of the Azure Crystal who vanquishes evil by bathing the world in light. After joining forces with Yoshikiri, the warrior chosen by the Golden Crystal, they set off on a journey to stop the Dark Crystal and its powers. Yoshikiri has taken to calling her "Sis," but Elena doesn't seem to mind this type of playful behavior.
Entries for different versions of Starlight Elena.

Starlight Elena's stats at her highest levels are as follows (with no passive abilities taken into account), along with the maximum amount of stat points that can be increased through pot-enhancements:

Starlight Elena has one conditional ability:

Elena has five abilities that can be enhanced: Revitalizing Strike, Gemini Blade, Crystal, Shine Bright! and Crystal, Purify All!.

A moment in time depicting Elena touching the Crystal that grants her the power of all the warriors who have wielded it before her. She is determined to fight alongside her partner, the Azure Crystal, to bring back light to the world.

Azure Successor is a vision card affiliated with Starlight Elena. It features Elena touching the Azure Crystal and inheriting its power, transforming into her Brave Shift form. It grants base ATK/MAG +35 at Lvl. 1 and base ATK/MAG +60 at Lvl. 10. 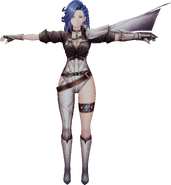 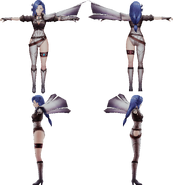