The Elementals are spirits that inhabit the land of Final Fantasy XIV. Their influence is strongest in the Black Shroud, where they were dominant for nearly all the Sixth Astral Era until the fall of Dalamud weakened them. The city-state of Gridania is governed by Seedseers, the padjal, who were chosen to represent the will of the Elementals. Many other conjurers can sometimes hear the voice of the Elementals. Those who defy the Elementals risk suffering the Greenwrath, a complete disintegration.

Since the Seventh Umbral Era, the Elementals influence was greatly weakened, to the point that poachers, bandits, and travelers in the Shroud are no longer at risk of incurring woodsin.

Elementals, when they chose to manifest, appear as fairy-like neon cherubs with colors corresponding to their elements. In 1.0, they were incredibly powerful, capable of disintegrating any mortal with the Greenwrath, and appeared as very high level (90+) creatures guarding certain places.

Since 2.0, the elementals have largely withdrawn, with mostly docile sprites appearing throughout Eorzea now. Elementals have only been directly seen in Conjurer class quests.

At the end of the Fifth Astral Era, the War of the Magi between Mhach, Nym, and Amdapor began to escalate out of control. Amdapori mages crafted the art of White Magic as a countermeasure against the Black Magic wielded by Mhach's void mages, who even sent Diabolos to attack Amdapor itself. The Elementals rage against the abuse of magic reached a crescendo in the form of Oha-Sok, an unaspected spirit of their collective wrath. It unleashed a great flood to eliminate all offending parties.

This ushered in the Sixth Umbral Calamity, as Eorzea drowned with most of the magi. Since then, the Elementals maintained a tight lockdown on the use of White Magic and kept Amdapor concealed. For centuries, no mortal could even live in the Twelveswood; the kingdom of Gelmorra had to remain underground. Only once Gelmorran conjurers could communicate with the Elementals were they permitted to gradually migrate into the Black Shroud, leading to the founding of Gridania. Among the hyur who live in the Black Shroud, some children are periodically chosen by the Elementals. They are born as padjal, possessing high attunement to the will of the elementals and remain eternally youthful. The padjal are known as Seedseers, who largely govern the city-state of Gridania, with the Elder Seedseer acting as the head of state.

In the Sixth Astral Era, the Elementals had a fearsome reputation throughout Eorzea for what they do to those bathed in Woodsin. The knights of neighboring Ishgard knew well enough to tread carefully in the Black Shroud. Even dragons were not immune to Elemental jurisdiction, as one became sealed in Amberscale Rock. Despite the danger of the Greenwrath, it did not completely deter all foreign invaders: the fanatical Ixal periodically raid for timber and other goods, Ala Mhigo sought to invade during the Autumn War, and the magitek armies of the Garlean Empire have not hesitated to establish an outpost at Castrum Oriens.

When Dalamud fell at the beginning of the Seventh Umbral Era and released the primal imprisoned within, devastation to the realm severely weakened the Elementals. Now almost entirely withdrawn, the Elementals seemingly can no longer enforce their law in the Twelveswood, leaving poachers and brigands more bold about operating in the forest.

Fire Elemental in a cave (version 1.0) 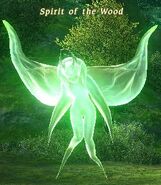 Spirit of the Wood