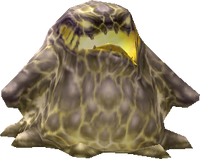 This jiggly fiend withstands any physical assault with ease and absorbs all lightning spells. Like the ice flan, however, the electric flan is also weak to flame-based attacks, so those who find themselves faced with one of these creatures are advised to shock it into submission with a fire spell or two.

The Concordians refer to this creature as the "gateau shockalot" and have recruited its brethren into their ranks as shock troopers in the most literal sense. Rumors have surfaced of an enormous subspecies of electric flan known as the "kukulcan," but none in the dominion have been able to confirm this information.