Elastoid is an enemy is Final Fantasy VIII. It is an Estharian anti-personnel weapon that floats with an anti-gravity engine. It attacks with its four pliable metallic limbs.

Anti-personnel weapon made in Esthar. Floats with an anti-gravity engine. Attacks with its 4 pliable metallic legs.

Elastoid usually casts support magic on its allies, and can also dispel statuses on player characters. When its HP falls low, Elastoid starts to spin wildly, and gains access to the Reflect Beam ability. At high levels, Elastoids can be a good source of Meltdown spells.

The Elastoid is one of only three enemies in the game who drop Laser Cannons that teach Quistis the Blue Magic spell Homing Laser. The others are the Belhelmel and the Mobile Type 8. Laser Cannon can also be refined into Pulse Ammo needed to model Squall's ultimate weapon, Lion Heart.

Elastoid are one of two monsters that can be transformed into the strongest Triple Triad Level 7 Boss Card, Ultima Weapon. The other is the Tri-Face.

Elastoid is a Level 5 Monster Card in Triple Triad used for playing the minigame and for making into Steel Pipes with Quezacotl's Card Mod. Steel Pipe is a useful item to have in large quantities, and thus collecting Elastoid cards is a good idea if the player is already partaking in Triple Triad. 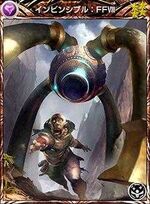 Reflect Beam.
Add a photo to this gallery

It is known as Invincible in the Japanese version, and as Invinta in the Italian version. The name "Elastoid" derives from the word "elastic" and alludes to its bendy limbs.

Retrieved from "https://finalfantasy.fandom.com/wiki/Elastoid?oldid=3467933"
Community content is available under CC-BY-SA unless otherwise noted.