Cid Pollendina: Oh, shut up and help me remodel the Elarra page!
Please expand this article into a full one. The following tasks need to be completed:This request can be discussed on the associated discussion page. Remove this notice upon completion.

Tetsuya Nomura
Elarra is a protagonist from Final Fantasy Record Keeper. She is a mysterious girl discovered in the Hall of Magicite that guides Tyro through his adventures. She has no memory and her true identity is shrouded in mystery.

While introduced in the Episode Magicite content, Elarra would eventually serve as the deuteragonist of the game's Record Dungeon scenario.

Elarra is a young girl with long, ash-brown hair tied in pigtails with yellow ties and light brown eyes. She wears pink robes over a pink dress and a pink academic cap with yellow tassels. She also wears a yellow cravat, pink shoes, and pink-rimmed white socks.

Upon completing the Nightmare Dungeons, a thirteenth Crystal appears in the chamber and shatters, releasing Elarra, who floats in the chamber silently. Dr. Mog is confounded by her presence, but Tyro can hear her speaking in his mind. Elarra seeks Tyro's aid in reclaiming the Magicite lost deep in the records, and takes him to their realm to begin the task of restoring them.

Once Tyro restores one Magicite, Elarra becomes able to vocally communicate with him and Dr. Mog, but can not tell them much due to not having her memories; the three speculate that continuing to restore the Magicite may restore her memories as well.

As Tyro starts his journey through the 4☆ magicite dungeons, a mysterious figure appears and attempts to attack Tyro and Shadowsmith for awakening more memories of the creatures. Elarra manages to create a barrier to defend the two of them from the figure's magic. The figure retreats and gives them all a foreboding warning to stop interfering, or else they will face the consequences.

When Tyro finally defeats the holy and dark 4☆ magicite dungeons, the mysterious figure returns and attempts to attack Tyro and Shadowsmith for their continue meddling with the magicites. However, Elarra's seal is finally broken, and she is able to hold him back from attacking the group in the nick of time, causing the figure to retreat for the time being. With Elarra now free from her prison, she is able to leave the magicite realm and is taken to live at the Royal Archives.

Sometime after the events of the magicite dungeons, Elarra later accompanies Tyro on his journey to find and restore the Corrupted Paintings.

Elarra serves as the player's only Roaming Warrior choice in Magicite dungeons. Initially, she is limited to casting Fabula Guardian, which raises the party's DEF and RES by 200% for 30 seconds and has a three second cast time, similar to Tyro's Sentinel's Grimoire, though it lasts five more seconds.

After defeating all eight 3☆ magicite dungeons, Elarra gains a new Soul Break, Fabula Raider. An offense-oriented Soul Break, it raises the party's ATK and MAG by 30% for 30 seconds, and grants Haste.

Once all eight 4☆ Magicite Dungeons have been defeated Elarra gains a third Soul Break, Fabula Priestess, that instantly restores all party members to full HP.

Elarra is playable in Record Dungeons and can be unlocked for other modes by completing The West Mines 2 dungeon in Volume 1's Chapter 1: Untrodden Paths.

Elarra appeared as a limited-time attack medal as part of a collaboration event. Similar to Tyro and Doctor Mog's medals, her ability was Thunderous Roar.

When first released, Elarra's name was erroneously given as "Ulala". This was corrected with a backend update on March 1, 2018. The error was most likely from transliterating the original Japanese.

Before her formal introduction in the game, Elarra was teased during the 1st year anniversary of the Japanese version in 2015, being featured on the anniversary artwork by Tetsuya Nomura. However, Elarra would not formally be introduced into the game until the launch of Episode: Magicite in March 2017, almost a year and half after she was teased. 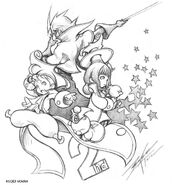 Sketch of Ellara alongside Tyro, Mog, and Shadow Smith for the 2nd anniversary.

Title screen image for Halloween 2017 from the Japanese version.

[view · edit · purge]In Greek myths, Elara was a mortal princess and mother to the giant Tityos by Zeus. She was said to have died in childbirth, given the size of her son.