El Niño (エルニーニョ, Eru Nīnyo?), also known as Maelstrom, is a recurring ability in the series. It is generally used by piranha-type enemies, in particular the enemy and summon Remora. It is generally a powerful Water-elemental magic attack that targets the entire party.

El Niño is an ability usable through Mog's Water Harmony Dance, at a 7/16 chance. It deals water-elemental damage to all enemies with a Spell Power of 61, ignoring split damage and being unblockable. El Niño is also an enemy ability used by Rhizopas, Angler Whelk, Leviathan, Blue Dragon (Dragons' Den), Kaiser Dragon, Gorgimera, and Zeveak.

Maelstrom is an enemy ability used by Remora and Maelspike. It inflicts non-elemental magic damage to the entire party with a base power of 32.

El Nino is an enemy ability used by Xiphactinus, which inflicts moderate non-elemental damage and Slow to the party.

El Niño+ is one of Mog's follow up attacks, which triggers after he deals hp damage, if any party member if debuffed, and when his overhead effect "water harmony" is active. It is a 3AOE-Brv+Hp attack that removes 2 debuffs from each party member.

El Niño is an enemy ability used by Angler Whelk, Rhizopas, and Seaflower, which inflicts major water-elemental damage to the party.

In addition, Strago has El Niño Breath as a Ultra Soul Break, which involves Relm sketching Rhizopas to perform El Niño to power up Strago's Aqua Breath Lore. The attack deals ten water-elemental magic attacks to one enemy, while also granting the party reduced charge delay and a barrier that reflects damage to the attacker as water damage. 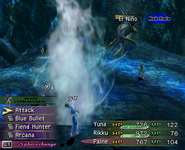 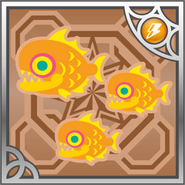 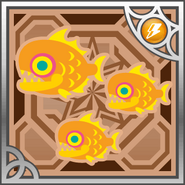 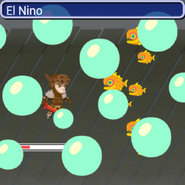