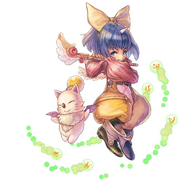 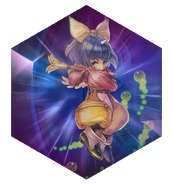 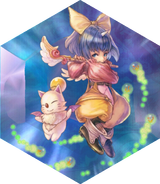 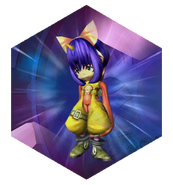 The last survivor of the summoner tribe. Having spent years with only the moogles of Madain Sari as company, she impetuously decides to follow Zidane and leave behind all she has ever known for a chance at love.

She is a Defense and Support oriented character. 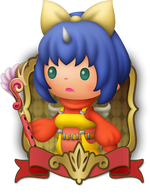 Eiko is an ally and a summonable Legend. She is depicted in her Final Fantasy IX outfit. Her EX ability is Carbuncle (Meteorite). 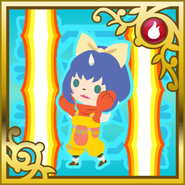 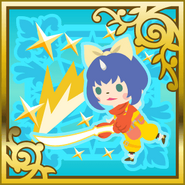 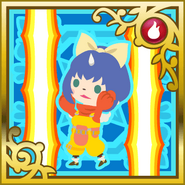 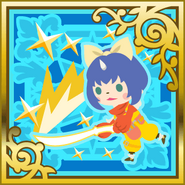 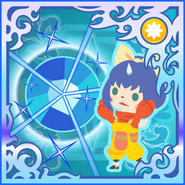 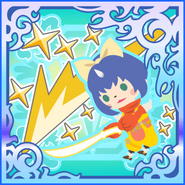 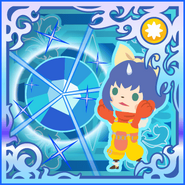 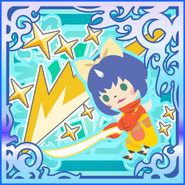 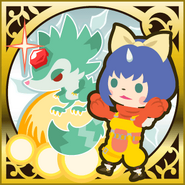 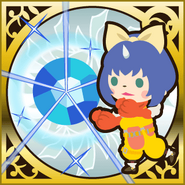 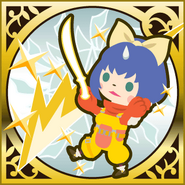 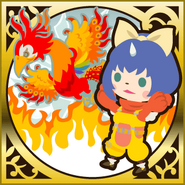 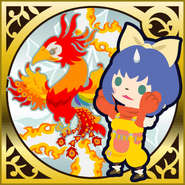 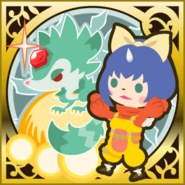 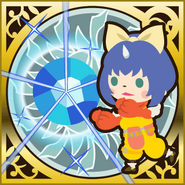 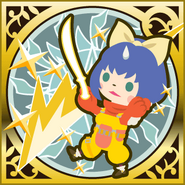 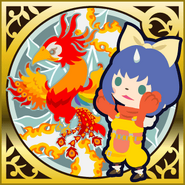 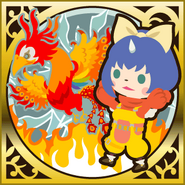 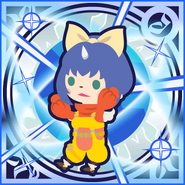 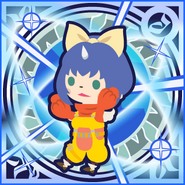 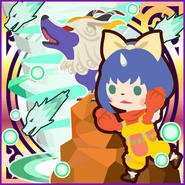 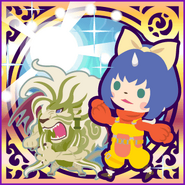 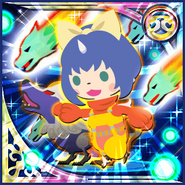 Not every girl is descended from legendary summoners and has a moogle for a friend.

Eiko is an exclusive character only available from the Premium Character Shop as a random downloadable content, she summons Madeen during battle.

Eiko is a playable character who could be recruited as a First Time Reward for completing Conde Piete Mountain Path - Road of Roots on the Classic difficulty in the Challenge Event To the Holy Land. She could be recruited via the Bonus Quest, "Complete Village of Dali Elite (IX)", and has also appeared in A Place to Call Home and A Summoner Reborn as a supporting character.

Eiko (along with Mog) appears as a summonable vision and optional playable character. A 5-7★ Rare Summon available since the event Alexandria Castle, her job is listed as Evoker, and her role are Healing and Support, being one of the "summoner" units. Her Trust Master reward is an instrument, the Angel Flute, whereas her Super Trust Master reward is the passive ability Essence of Summoning.

Kindergarten Summoner
Despite her tender age of 6, Eiko is already a skilled summoner. Not only that, she's more independent than many people five times her age. She passes her days caring for and watching over Big Bridge, both for the sake of passing travelers and for Alexander himself. To sum it up, this little girl's competence levels are actually kind of frightening.

Sadly, Big Bridge doesn't see much foot traffic, so Eiko sometimes gets lonely. When visitors come a-stopping by, she always strikes up a long conversation.

Fast Friends
By the time Eiko was old enough to walk, she had already gained the knowledge, skill, and poise required to be a first-class summoner. It's a shame her family isn't around to see how far she has come... Oh, but don't worry. It's not what you think. Eiko simply decided to strike out on her own. (Calling her "precocious" would be an understatement.)

Eiko is very fond of Rydia and Lady Yuna, and they see each other quite often. In a way, they have become her new family.

The Fenrir Primes
Eiko used to live alongside moogles and other Mirages. Now that she's a full-fledged summoner, she is accompanied only by her familiar, Fenrir, with whom she shares her magic.

Eiko's Fenrir may bear a striking resemblance to the Fenrirs you get by transfigging white nakk, but his soul is actually a little different. Eiko's Fenrir is a special variant called a "prime." The primes govern the power of the moon, and are not to be trifled with.

Still, if Lann and Reynn manage to transfig a white nakk, they can get a glimpse of the fenrir tribe's true glory.

Summoners call the original souls of their familiars from their original worlds, which, as you'll come to learn, makes them very different from Mirage Keepers. One thing is for certain: most familiars are far more powerful than your run-of-the-mill Grymoirian Mirage.

The following is a list of quotes uttered by Eiko when talking to her.

You know, as a summoner, I have a role to play as well.

I just came by to see how things were going.

Never assume that everything's going to be okay.

Do you want to cross the bridge again?

Eiko appears as an opponent in PlayOnline's Tetra Master.

Eiko appears on a Triple Triad card in the version playable via Final Fantasy Portal App.

In Dragon Quest & Final Fantasy in Itadaki Street Portable, Eiko appears alongside Zidane. She may be summoned with chance cards "91" or "94" (the latter summons her and other two characters), and gives away suits if the player lands or passes by the space where she is. Healie (a Heal Slime from Dragon Quest) replaces her in later Itadaki Street games.

Eiko in Lord of Vermilion Re:2.