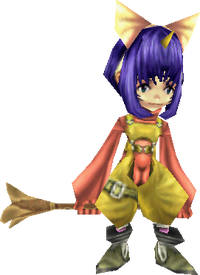 Eiko is a playable character in Final Fantasy IX. She is capable of casting Wht Mag and summoning eidolons. She wields flutes and rackets in battle. She has the most Wht Mag spells and her summons' attacks change depending on what Add-on she has equipped. She is more of a supportive party member (and thus best-suited for the back row), although she learns Holy, the ultimate offensive Wht Mag spell, later in the game. Eiko is likely to be the party leader for Desert Palace, although the player has the option to take her to Oeilvert instead. Eiko also has two victory poses, depending on whether she is wielding a flute or a racket. When she equips a flute she will dance happily while playing it. When she equips a racket, she will hug it close and jump into the air.

Eiko learns abilities that enhance her skills as a White Mage and Summoner; Boost powers up her eidolons, and Concentrate her magic, and Half MP halves the MP cost of her spells and eidolons. Eiko is the only character to learn both MP+10% and MP+20%. Eiko is the first of the party to learn Auto-Regen. Her unique ability is Guardian Mog, which heals her from status ailments that usually carry over at the end of the battle.

Eiko's stock of White Magic is larger than Dagger's. She can use unique spells like Jewel, which extracts an Ore from an enemy, and Might, which increases a unit's attack power. She is the only main character who can use the powerful Holy spell (a temporary playable character, Beatrix can also use the spell).

If Zidane and Dagger are alive when Eiko summons an eidolon for the first time before they reach Madain Sari, they will exchange a dialogue mid-battle. Zidane will say "Dagger, was that an eidolon?", and Dagger will reply "I think so. Eiko can use magic too?" This resets everyone's turn regardless whether an action has been chosen.

Eiko has the lowest physical stats, but her initial stats will be the same as Marcus's when he leaves the party, meaning that if the player bothers to level up Marcus early on Eiko can potentially get the highest HP and MP of any character. This is known as the Marcus/Eiko stat bug.

Eiko's equipment draw consists of female-exclusive equipment, mage robes, flutes, and rackets. When Eiko is equipped with a flute, her spellcasting sound effect is slightly different than the other characters'. As she plays the flute as her spellcasting animation, it appears she uses music to control her magic.

During the party's first visit to Madain Sari, Eiko prepares a meal of rock-fisted potato stew and barbecued fish. She assigns the tasks of fishing, digging for potatoes, and helping her in the kitchen to three of her moogle friends. While fishing, one of the moogles catches Quina, who had taken the bait instead. Quina offers to help Eiko with her cooking and, depending on the player's choices, the dinner will either be a success or a disaster.

The better the food is, the longer the dinnertime conversation will be. If the meal turns out excellently, Eiko will explain how summoners communicate with eidolons through their horns.

Eiko can play the jump rope minigame in a reconstructed Alexandria if she is in the party and the player visits the chapel. The minigame is identical whether the player uses Eiko or Vivi to play.