Eiko Carol, known as Little Girl for the short period before a name is selected, is a playable character in Final Fantasy IX. She hails from Madain Sari on the Outer Continent. She has a horn on her forehead and can summon eidolons.

Eiko has green eyes, a small summoner's horn on her forehead, and blue hair cropped above her shoulders with a ribbon tied into a large bow on top. She wears a red turtleneck and pink bodysuit, loose yellow pants that gather at the ankles, a yellow chest plate connected to a belt around her waist as part of the ornamental wings she wears on her back, purple socks and white ankle boots. Eiko's jewel is called "the Memory Earring."

Eiko is spunky and snobbish, yet desperately lonely, having lived alone in Madain Sari with only moogles as her friends for most of her life. She develops a crush on Zidane Tribal and goes as far as to write a love letter to him, but snaps out of it after a while as her infatuation has more to do with not wanting to be alone than grown-up feelings. Eiko knows the world is vast, but is afraid to leave what she knows out of uncertainty and reverence for a promise she had made to her grandfather to not leave Madain Sari until her sixteenth birthday. Meeting Zidane and his friends allows Eiko to connect with the outside world and sparks a longing in her to leave Madain Sari and meet new people.

In the Japanese version of the game, Eiko has a tendency to talk in third person.

The village of Madain Sari was once a thriving town populated by summoners. The Terran airship Invincible destroyed the town for Garland to remove the possible threat of Gaia's eidolons, and most of the community perished. Eiko's parents were some of the last survivors,[4] and after her parents perished as well, Eiko was raised by her grandfather. When he died Eiko was left to live in Madain Sari with the company of moogles.[5] One of them, Mog, always travels with her, and the two traded friendship ribbons. She and Mog frequent the dwarves' town of Conde Petie to steal food.

During a raid Eiko is caught and meets Zidane along with Vivi, Garnet, and Quina. Delighted at the prospect of having company, Eiko offers to take Zidane and his friends to Madain Sari where she cooks them a meal to impress Zidane. She senses Zidane is in love with Garnet, and tries her best to steal his heart in hopes he would stay with her. She accompanies Zidane and his friends to the Iifa Tree, which was sealed with the eidolon Carbuncle. She breaks the seal and Eiko, Zidane, and the others descend to the bottom of the tree and fight the Soulcage whose defeat clears up the Mist Continent of Mist.

Eiko takes Zidane back to Madain Sari when a moogle tells her the village's precious stone has been stolen. The thief turns out to be Lani, the bounty hunter working for Queen Brahne of Alexandria to steal back Garnet's pendant, really a shard of a powerful summoning gem. Lani exalts at having found a similar stone from Madain Sari and holds Eiko hostage, but is betrayed by her accomplice Amarant Coral and forced to flee.

After Zidane and Amarant duel, Eiko tells Zidane, Garnet, and Vivi about the precious stone and how her grandfather told her to keep it safe and to not leave Madain Sari until she is sixteen. Eiko decides to accompany Zidane anyway, taking the stone with her and wearing it as an earring.

Eiko, my lovely child. Until you turn 16 and have your own eidolon to your control, stay in this village. Then build strong friendships with others. I wish for your happiness from far away.

The party returns to the Iifa Tree where they meet Kuja who battles Brahne's fleet. Eiko helps Garnet find another eidolon, Leviathan, the eidolon that had been sealed at the tree, so Garnet could summon it to help her mother, Queen Brahne. Garnet cannot save her and, in the wake of the queen's death, is crowned the queen herself. Thus the fragments of a summoning gem Brahne had collected earlier pass on to Garnet's possession.

A week later the party is back in Alexandria for Garnet's coronation. Having never been to a city before Eiko tours Alexandria Castle and meets Doctor Tot, Garnet's old tutor. She asks him to help her write a love letter for Zidane, but on the way out trips over a banister and gets her wing ornament stuck onto a chandelier. She meets Baku, and, unable to free herself, asks him to deliver the letter.

Baku loses the letter and it falls into numerous hands, including those of Beatrix, Marcus, Blank, and Steiner, but never reaches its intended recipient. Steiner frees Eiko from the chandelier and escorts her out of the castle. The party visits Garnet, now the queen of Alexandria. As a sign of their bond as the world's final summoners, Garnet and Eiko share the fragments of the old summoning gem with both keeping two. After the audience Eiko is heartbroken when Zidane does not show up at the docks, even though the real reason is that Zidane never saw the letter.

The next day, Zidane travels to Treno to participate in a Tetra Master tournament. Eiko joins as well and spends some time telling Doctor Tot, who resides in Treno, about Madain Sari. Mog tells her Alexandria is in danger and she summons Zidane to return there. They take Cid Fabool IX's Hilda Garde II, which is poorly designed due to Cid's mind not being the same as an oglop. While on the ship Eiko feels a sensation from atop Alexandria Castle, and flies to the roof to meet Garnet. They hold out the four jewels and summon Alexander who defeats Kuja's Bahamut and forms a protective ring around Alexandria.

Kuja summons the Invincible to enslave Alexander, but Garland takes it over and destroys Alexander and Alexandria Castle. Zidane rescues Garnet and Eiko, though the latter is annoyed Zidane goes to Garnet first and that she is embracing him through her rescue. The party retreats to Lindblum where Eiko discovers Garnet lost her voice due to the shock of witnessing Alexandria's obliteration. She stays with Steiner to take care of Garnet while Zidane and the others look for a way to transform Cid back into a human. They fail, turning Cid into a frog. Eiko, Garnet, Steiner, Quina, and Cid join Zidane, Vivi, Freya, and Amarant in search of Kuja, Brahne's former weapons dealer who is on a quest to overtake Garland and take over the world.

They find him in his Desert Palace on the Outer Continent. Kuja traps everyone except Cid and threatens to kill them if Zidane does not bring him the Gulug Stone from Oeilvert. Zidane agrees, but Kuja does not keep his promise. Cid saves the others, and Eiko leads the escape to Kuja's room for revenge (unless Zidane chose to take Eiko to Oeilvert, in which case another party member becomes the leader). They meet up with Zidane outside, and Zidane discovers Kuja has tricked him. The party enters his room, but Eiko is trapped outside, and Zorn and Thorn, Kuja's lackeys, abduct her, despite a failed attempt by Cid to protect her from them.

Zidane and his friends follow Kuja's Hilda Garde I to Esto Gaza on the Lost Continent where they enter Mount Gulug. At its base they discover Zorn and Thorn attempting to extract eidolons from Eiko, even though she is too young to survive the ritual (a fact that is of no concern to a heartless, uncaring Kuja). Mog interferes and transforms into the eidolon Madeen, saving Eiko.

The jesters attack and Eiko summons Madeen to annihilate the twins. The rest of the party arrives to confront Kuja, but he leaves and the jester twins' corpses transform into Meltigemini. After defeating Meltigemini, Eiko receives Mog's ribbon as a farewell gift. Mog was an eidolon who had taken the form of Mog to be with Eiko, but as Eiko is growing up, Madeen deems that Eiko no longer needs Mog, reminding her that they will always be together in spirit.

When the party splits to simultaneously attack the four elemental shrines protecting the entrance to Terra, Eiko insists on teaming up with Garnet and uses the opportunity to ask her if she is in love with Zidane, with awkward results.

In Terra, a mysterious ancient world that exists on the inside of Gaia, Eiko explores until Zidane goes missing and the party teams up to find him. Eiko and Vivi are at Zidane's side when he awakes in Pandemonium, having been banished there by Garland after telling Zidane the truth of his origins as Garland's pawn. In a depressive rage Zidane calls Vivi and Eiko "stupid brats" and locks them in the room.

Zidane comes to his senses, and the reunited party witnesses Kuja enter Trance and kill Garland and decimate Terra. The party returns to Gaia and finds it covered in Mist. The party travels to the beginning of all time in Crystal World to stop Kuja's evil schemes, and after returning they find the Iifa Tree writhing. Zidane chooses to stay in the collapsing Iifa Tree and save Kuja, while Eiko, showing concern for his safety, confesses her love for him before departing with the others.

Eiko is adopted by Cid and his wife, Hilda, who has reverted him to his human form. She is overjoyed at being a part of a family, calling her adoptive parents "Mother" and "Father." When Tantalus Theater Troupe returns to Alexandria to perform I Want To Be Your Canary for Queen Garnet, Eiko is among the crowd to witness Zidane's return and reunion with Garnet.
Spoilers end here.

Eiko wields flutes and rackets, can summon eidolons, and can cast Wht Mag spells. Eiko has the largest stock of Wht Mag spells, making her the strongest healer. She has four mostly defensive summons and each change their abilities based on her add-on. Eiko's Trance is Dbl Wht, which allows her to cast two Wht Mag spells in one turn.

Eiko can also participate in the jump rope minigame in Alexandria.

"Eiko's Theme" is a variation of "Melodies of Life" based on chord progressions (with no discernible melody) and set in the 6/8 time signature. A remix of the theme includes "Girl of Madain Sari," which plays while she wanders around Alexandria Castle at the beginning of disc 3, thinking of writing a love letter to Zidane.

Eiko and Garnet are the only characters in the game with audible voices, as they are heard singing in cutscenes.

Eiko has appeared in the following games throughout the Final Fantasy series:

Eiko has made key guest appearances in the following non-Final Fantasy games: 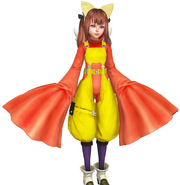 In Gunslinger Stratos 2, a costume based on Eiko was released on November 6, 2014.

In Insomnia in Final Fantasy XV, one of the signs reads "Karaopera Entertainment Little Eiko".

[view · edit · purge]"Carol" designates a type of song or dance, and originates from the Ancient Greek word choraules ("one who accompanies a chorus on the flute").