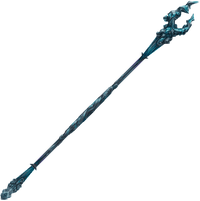 A shaft of boxwood, carved into a hexagonal shape and reinforced with metal plates.

The Eight-Fluted Pole, also known as the Octagon Rod (八角棒, Hakkaku-bō?) and Eight-Sided Pole, is a recurring weapon in the Final Fantasy series. It is generally a pole with no special abilities, however, it tends to be one of the strongest poles, if not the ultimate one.

Staff with a water god dwelling inside.

The Octagon Rod is a high-level staff for Vivi. It absorbs Wind and Water damage and increases Water damage. It makes the user weak to Wind as well as granting absorption to it. Its Add Status is Trouble, and it teaches Firaga, Blizzaga, and Thundaga. It can be bought from Daguerreo and Esto Gaza after completing the Desert Palace for 4,500 gil. If not purchased before entering the Shimmering Island, it becomes unobtainable.

Eight-Sided Pole is a staff that provides 57 damage, 402 delay, Accuracy +4, and Attack +8. It deals 8.51 damage per second and accumulates 103 TP per hit. It can be equipped by level 75 Monk, White Mage, Paladin, and Dragoon. It can be bought for 300 Sparks of Eminence from Isakoth in Bastok Markets (E-11, Rolandienne in Southern San d'Oria (G-10), Fhelm Jobeizat in Windurst Woods (J-10), and Eternal Flame in Western Adoulin (H-11).

The Eight-fluted Pole is the second strongest pole after Whale Whisker. In the original PlayStation 2 version, it has no special abilities, but has an Attack power of 88, and combos frequently. Poles' attack speed is average at 2.47s charge and 1.2s action time. It requires the Poles 5 License to be obtained for 45 LP. It can be stolen from Vagrant Soul and Abelisk, both of which are Rare Game.

In the Zodiac versions, it provides 91 Attack, 30 Evade, 25 CT, 15% combo rate, and requires the Poles 6 license for 90 LP. It can be found as a treasure in the Cerobi Steppe (North Liavell Hills), dropped by Etherian (3% chance), stolen from Abelisk (3% chance), and from the Hunt Club sidequest. It can be equipped by the Monk class.

The Eight-fluted Pole (also called Octagon Rod) is the second strongest pole. When striking, it has a chance to cure nearly all status effects on the target. This is counter-productive for classes such as an Mystic, who's main niche is spreading negative status. It also has an Attack of 12 and a Defense boost of 20%. It costs 20,000 gil and can be used by Arithmeticians and Mystics. It can also be found with the Treasure Hunter ability in the Limberry Castle Undercroft as a rare treasure.

The Eight-Fluted Pole appears as the penultimate pole, and provides +49 Attack, and +2 to Evasion, Speed, and Defense. It teaches Avalanche to Geomancers for 250 AP, and Pummel to Master Monks for 300 AP. It can be bought for 6,200 gil in the shop after creating it in the Bazaar after using a Storm Sigil, Gold Chalice, and Red Geeps. 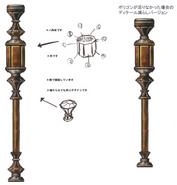 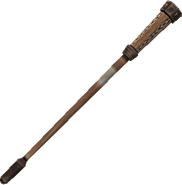 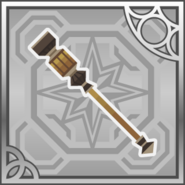 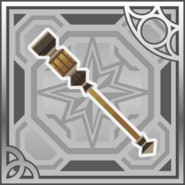 Fluted poles find their origins in Japanese bō staves. [view · edit · purge]Bo staves of the more antiquated variety were carved in various facings, and had models up to at least an octagonal shape. Such poles were effective in battle, as through the wedging provided, their angles increased the weapon's hitting power. Some were reinforced with metal plates to prevent blades from cutting down the pole, which also augmented the pole's capabilities and strength.