Arcade, PlayStation, PlayStation Network
Ehrgeiz: God Bless the Ring is a 3D fighting game released for arcades in 1998 and later ported for the PlayStation in 1999. It was developed by Seiichi Ishii for Dream Factory and published by Squaresoft.

For the PlayStation, it received the subtitle God Bless the Ring. The word Ehrgeiz means "ambition" in German, and also happens to be the name of Zell's most powerful weapon in Final Fantasy VIII.

Ehrgeiz met with mixed reviews in the United States and was never released as a Greatest Hits game, thus defining it as a rarity to some.

Ehrgeiz differs from the traditional 3D fighting game because it allows the players to roam freely in the battle arenas. Characters do not always have to be facing each other during a match, but this restricts the camera to a more or less fixed position, zooming in and out with the action, but not tracking around the arena as would be common in most other 2D and 3D fighting games. The fast-paced battle system features arenas with platforms to jump on and backgrounds to interact with. The red stamina bar under the health bar can be consumed to use an alternative fighting style, usually signified by the character glowing red along with drawing out a weapon. With some characters, the bar can help them exert more power, and in one or two cases, achieve a transformation.

The PlayStation version features some minigames based on track and field events and one bases on the board game Othello. It also features a quest mode in which the player fights through dungeons finding items such as armor, weapons, and spells.

Ehrgeiz's main tie to the Final Fantasy series is the ability to play as a number of characters from Final Fantasy VII. All of them have a Limit Break where they turn red and their power increases. Cloud, Tifa, and Sephiroth are playable immediately, while it is necessary to unlock the rest by beating the game with different characters. The Buster Sword and Masamune can be drawn and wielded in combos, and Yuffie and Vincent have their trademark ranged weapons, but the game relies more on brawling in hand-to-hand (punches and kicks) combat.

Though Red XIII is not in the game, the boss character Django bears resemblance to him in his alternate coloration, while his default color resembles Seto's stone form. Django's moveset also refers to Titan, Hades, Leviathan, Chocobo, Bahamut, Ifrit, Shiva, Phoenix, Bahamut ZERO, Mega Flare, Giga Flare, Knights of the Round, Seto and Nanaki. Ehrgeiz also features music from Final Fantasy VII (arranged by Takayuki Nakamura, composer of all other music in the game). The titular sword Ehrgeiz is said to contain Materia, as well. The Phoenix Down is dropped from the final boss Phoenix inside the Forsaken Dungeon once defeated, the Ark Dragon also appears as a boss within this Quest Mode.

When Ehrgeiz was rereleased with a Square Millennium Collection, the additional merchandise only featured Final Fantasy VII characters and none of the game's originals. The disc features art of Cloud and Sephiroth, and it sold with two figures of Vincent in his two attires. 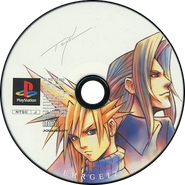