The following article is based on a subject that has not been officially named in any official Square Enix material; the current title is merely a placeholder.

Normally a secret summon related to the Magic Lamp, the Eggman is also a dummied enemy exclusive to the Japanese Game Boy Advance version of Final Fantasy V.

Eggman can be summoned legitimately in all versions of the game by using the Magic Lamp. Once Chocobo has been summoned 19 times, Eggman will be summoned instead every time the Magic Lamp is used until it is recharged. When summoned, Eggman's sprite does not actually appear in either the Japanese version or the English version, and will try to use Egg Chop and fail, displaying the message "Too far away!" or "Can't reach" in the PlayStation version.

If Eggman is hacked into the Japanese Game Boy Advance version the game as an encounterable enemy, its name will appear blank when fighting it due to not having a name in the game's code. It will take on the stats of whatever enemy it is replacing, including attacks, HP, and items dropped.

In Final Fantasy XIV's Easter event of 2015, the player characters got the title "Half-Boiled Hero", a possible reference to Eggman and his origins as the "soft-boiled hero".

Eggman's red scarf and pose are a reference to the Kamen Rider franchise. 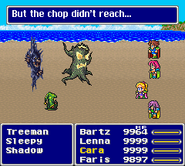 Eggman is a mascot character from the Hanjuku Hero (literally "Soft-Boiled Hero") series of Japan-only video games, created by Takashi Tokita in 1988.