Edward is a playable character in Final Fantasy IV and Final Fantasy IV: The After Years. He is a Bard who can sing songs for various effects during battle, but is weak stats-wise.

Edward's stats are low, both physically and magically. In all 2D versions, after level 70 his stats skyrocket in an Onion Knight-like fashion, giving him the potential to attain the highest raw stats in the game. 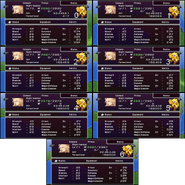 Edward uses Bardsong, also known as Sing. He has the abilities Salve and Hide, the former also known as Heal. Sing inflicts a status ailment on an opponent, Salve allows Edward to split a Potion among the party, and Hide removes him from battle until his next turn allowing him to avoid attacks. Edward automatically hides when low on HP. In the Game Boy Advance and PlayStation Portable releases, the Harmonious Ring changes Sing to Chant, which casts Protect and Shell on the party.

In the 3D releases, Bardsong allows Edward to pick and choose the effect of his song, and he learns more songs as he levels up. Salve allows Edward to use healing items on all party members at once, such as, rather than use a Potion split among a party of five, Edward will use a Potion on each of them and consume five from the inventory.

Edward can equip hats, clothes, armlets and rings for armor. His weapon arsenal is limited to harps, daggers, and bows and arrows, depending on the version of the game. In both versions, he joins the party with a Dream Harp, a Feathered Cap, a Bard's Tunic and a Ruby Ring.

Edward appears as the Bard in the scripted battle with Tellah at Damcyan.

Edward is stronger, but is still one of the weakest party members. He has only a few Band abilities, but the King's Quad allows him, Cecil, Edge, and Yang to break the damage limit of 9,999. Edward has all-around average to poor stats with the exception of his above-average Speed, and has very low HP. He is a fairly effective attacker, as his harps do extra damage to various enemy types, some have elemental properties, and they are all long-range allowing Edward to attack at full power from the back row, reducing the handicap posed by his low HP.

See also: Bardsong (The After Years)

Edward retains his Bardsong and Salve abilities and can use Escape, which functions identically to Hide. Salve functions the same it does in the 3D releases of Final Fantasy IV, while Bardsong's effect is chosen randomly when the command is issued, and can be selected to affect a single target or an entire party. There is also a chance Bardsong will do nothing. As Salve can be used with any item, including Remedies, Phoenix Downs and Ethers, Edward is the most versatile healer, able to revive several party members in one turn or restore everyone's MP, and with X-Potions can heal as effectively as a White Mage.

Edward can equip harps, bows and arrows, daggers, hats, clothes, armlets and rings. In his own Tale, he starts with a Dream Harp, a Feathered Cap, a Bard's Tunic and a Gil Band.

Edward appears as a boss in Kain's Tale. It is a storyline fight impossible to lose unless the player lets Edward kill them, and is thus not of great significance.