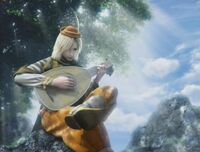 I learned it while traveling as a bard. It is a melody used to ward off evil fey. I thought perhaps it may serve to disrupt his concentration.

Edward, after removing the magnetic barrier in the Lodestone Cavern

Composed and arranged by Nobuo Uematsu, the track appears in the Final Fantasy IV: Original Sound Version as track 18 on disc 1. For the soundtrack of the Nintendo DS version, the track is track 19 on disc 1.

In the 3D remakes, the song first appears when Cecil and Rydia convince Edward to aid them in finding the Sand Pearl in the Antlion's Den. Later, Edward plays his harp by the oasis in Kaipo in reminiscence of Anna.

"Edward's Harp" plays an important role during the battle against the Dark Elf in the Lodestone Cavern. The magnetic field greatly weakens Cecil and his allies, but due to the Whisperweed they carry, Edward is alerted of their danger and plays his harp to help them. The music conveyed through the Whisperweed causes the Dark Elf to lose control of itself, allowing Cecil's party to wield metallic weapons and defeat it. The song continues to play throughout the battle until the Dark Elf transforms into the Dark Dragon.

"Edward's Harp" plays as the background theme for the restored Damcyan Castle.

The track is known as "Melody of Lute" on this album containing piano arranged versions of themes from the game. All the songs are performed by Reiko Nomura.

The track is known as "Edward's Harp".

The track is known as "Melody of Lute", and arranged in an Irish Celtic style. This version is also found on the Potion: Relaxin' with Final Fantasy album.

This piece neatly fits the love and care of this song, enforced with guitar, violin, bass, and percussion. The arranger of this song, Mr. Nakamura, has arranged 2 songs in "PRAY", too. He has used Gypsy violin to bring out an ethnic feeling.

"Estrelas" ("Stars") is a vocal arrangement sung in Portuguese.