Taliesin Jaffe*(credited as Talis Axelrod in the DS version)

You think our rage a weakness? Then let me show you... how wrong you are!

He is the prince of Eblan and a skilled ninja. He is brash and has an inflated ego, and frequently flirts with women. He is kind with a strong sense of right and wrong, and defends his kingdom no matter the price.

Edge is a young, lean man, with short, slightly spiked silver hair and light-blue eyes. In Final Fantasy IV, Edge wears gray-blue and black armor with a gray cowl covering his mouth and a large gray cape. In Final Fantasy IV: The After Years Edge retains the cowl but has darker blue clothing on his torso with golden armor on the shoulders and waist, and has a wavier hairstyle. His cape is exchanged for what appears to be Rubicante's Cloak of Flame, depicted in Edge's artwork, and can be obtained for him as equipment in the game.

Edge is rude, hotheaded and stubborn, refusing to give up his pursuit of Rubicante and not backing down from the fight despite being outmatched. He is mean and obnoxious to the party at first, but comes to appreciate their help over time. He has an unrequited crush on Rydia and flirts with other women occasionally, remarking that Rydia and Rosa make "two babes in the party". He has a short temper and uses his rage as a source of power in his rematch with Rubicante, unlocking new Ninjutsu skills.

In Final Fantasy IV: The After Years Edge is matured, displeased with the Eblan Four's insistence to train in peacetime and thinking life would be better without the arts of war Eblan prides itself on. He cares for the Eblan Four, tolerating them and teaching them to survive and value their lives in their missions. In contrast to their previously seen relationship, it is Edge who calms a panicking Seneschal, worried about his health at his age if he continues, and he leaves the kingdom in the Seneschal's hands when he leaves to investigate the Tower of Babil.

The kingdom of Eblan is attacked and evacuated to Cave of Eblan, and the King and Queen disappear, thought to have been murdered by Rubicante, the Archfiend of Fire. Seeking revenge, Edge confronts Rubicante near the entrance to the Tower of Babil but is overpowered.

When Rubicante leaves, expecting Edge to become stronger, the prince is met by Cecil, Kain, Rosa, and Rydia, who aim to enter the tower and recover the seven Crystals that had been stolen by Golbez. They ask Edge to join them, but he refuses, claiming he will defeat Rubicante alone. Rydia bursts into tears, not wanting to see another person sacrifice his life like Tellah, Yang, and Cid. Not wanting to see a pretty girl cry, after being healed by Rosa, Edge declares them all fast friends and joins the party.

With Edge's secret Ninjutsu, the party sneaks through a wall into the upper floors of the Tower of Babil. They find Eblan's King and Queen, Edge's parents, seemingly normal at first transform into grotesque chimeras. After having to fight them, they are momentarily brought back to their senses and bid farewell to their son before taking their own lives. Rubicante appears and explains that Dr. Lugae was responsible and that he had no part in this. When Rubicante tells Edge his emotions will be his weakness, Edge retaliates and unleashes his latent powers.

After Rubicante's defeat, the Seneschal and several guards arrive expecting to find the Archfiend. Edge informs them of the urgency to stop Golbez from collecting all eight Crystals, and that he must help save the world. After asking the Seneschal to look after the kingdom, the party arrives at the room with the seven Crystals, though they fall through a trapdoor and end up escaping by way of an abandoned Red Wings airship, which Edge names the Falcon.

Appearing in the Underworld, the party heads to the Dwarven Castle due to being unable to fly over lava. After receiving King Giott's orders to find the eighth Crystal in the Sealed Cave before Golbez can, the party visits a recovering Cid in the infirmary, who upgrades the Falcon to withstand lava. Edge is ordered to help out when he is busy talking to Rydia, and Cid can see Edge is infatuated with her.

After obtaining the Crystal and returning to the entrance, Kain falls under Golbez's mind control and absconds with the Crystal. Following Giott's advice regarding the Mysidian Legend, and after Cid upgrades the Falcon to drill a way back to the surface, Cecil, Rosa, Rydia, and Edge travel to Mysidia where the Elder prays for help. The Lunar Whale arrives, and with it, the party travels to the Moon.

On the Moon the party finds Fusoya in the Crystal Palace, a Lunarian who was awaiting their arrival. After explaining the origins of the conflict, in which Zemus was controlling Golbez to carry out his deeds on Earth, Fusoya joins the party to neutralize the barrier upon the newly awakened Giant of Babil. After defeating the Archfiends and disabling the CPU, Fusoya awakens Golbez's memories, and his relation to Cecil is revealed. Golbez and Fusoya leave to fight Zemus, while Kain helps the party escape the falling Giant.

Although Edge blames Kain for the Giant's appearance, Kain makes amends with Cecil and the three decide to fight Zemus as well. When Rosa and Rydia are ordered to stay behind, Edge tells Rydia, "This is work for grownups", offending her. Rosa and Rydia stay aboard the ship and are allowed to join the battle. The five travel through the Lunar Subterrane and witness Fusoya and Golbez apparently defeating Zemus. Edge jokingly tells them that they should have "left [Zemus] for [Edge]." However, Zemus is reformed into Zeromus. Ultimately, Edge and the others defeat Zeromus after Cecil exposes his true form with the crystal.

With the world at peace, Edge becomes King of Eblan and oversees his nation's reconstruction, although the Seneschal has to order him to stop daydreaming about Rydia and focus on his duties. At Cecil and Rosa's wedding, Edge pretends to ignore Rydia when she arrives.

One year later, Edge asks Gekkou and Zangetsu to guard the Eblan Castle during his absence as he heads out to the celebration in Damcyan, but they tell him it ended hours ago. Edge says he'll see that for himself and heads for the Cave of Eblan after seeing the tower glow. He infiltrates the Tower of Babil and explores the upper area.

When Cecil and the twins are attacked by three Android Soldiers they merge into the Deus Ex Machina. Edge saves them and they continue up the tower looking for the missing Rydia. At level B6 they find Rydia and Edge recognizes her as a fake. The impostor summons elemental Eidolons to attack the group, followed by Bahamut. The real Rydia arrives and returns Bahamut to his senses, forcing the impostor to fight the group herself. Defeated, the impostor fades and reports to an unseen entity the "Eidolon system" is complete.

The inheritor of his parents' dying wish to revive the ruins of Eblan Castle. His people place great confidence in him, and he rules as the kind-hearted king of Eblan with the support of the Eblan Four.

Sixteen years later, Edge helps Rydia rebuild Mist. During the attacks by the Mysterious Girl, Edge and the Eblan Four infiltrate the Tower of Babil to confront the enemy, but are defeated. They jump out of the tower and onto the Falcon, where they find Rydia, Luca, and the Man in Black, all of whom Edge recognizes.

Together they round up others to break the force field surrounding the Baron Castle. Edge visits Eblan Castle prior to this and finds it under attack by Ifrit, who is mind-controlled by the Mysterious Girl. He attempts to fight Ifrit but Rubicante intervenes. Edge and Rydia confront Rubicante, who teaches them the Inferno Band, which they use to fight Ifrit and free him from the Mysterious Girl. 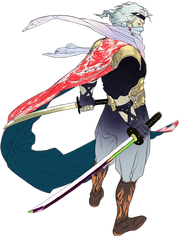 At Baron they defeat the Mysterious Girl, who is revealed to have a dozen copies of herself. They free Cecil from possession and on the True Moon the party faces various recreations of their former foes, who plead with the party to strike them down. This includes Rubicante, whom Edge makes peace with after facing him off alone. If he wins, he gains Rubicante's cloak, the Fire Scarf. They stop the Creator who was responsible for the Maenads, the Mysterious Girls' true identity.

The Maenads come to their senses as the Creator attempts to chase the party, and destroy him with a Meteor spell. Before dying, they ask Rydia to look after a young Maenad, saying it is all that remains of them. Edge leaves Eblan for Mist, where Rydia is raising the Maenad and has named her Cuore. Leviathan and Asura pay a visit and Asura reveals it was Edge who invited them.

Edge is a playable party member. He is a Ninja, who has high Speed, Evasion and physical stats, but low defense. His abilities are Steal, Throw and Ninjutsu. Steal allows him to steal some items from enemies, Throw allows him to throw offensive items to deal heavy damage to enemies, while Ninjutsu allows him to cast magic which always hits all enemies. He is able to dual-wield his weapons, can equip katanas, boomerangs and claws, and can equip lightweight armor. Edge is fast and deals decent physical damage, but is less survivable and powerful than other characters, and his offensive magic is much weaker than Rydia's or Palom's.

Edge joins the party at level 39. He retains his Ninjutsu, Throw and Steal commands, and functions identically to his appearance in the original game.

Edge returns as a playable party member. He has decent all-around stats aside from low Spirit, with his Speed once again being his greatest stat, and can serve both as a physical attacker and as a more powerful mage with Ninjutsu. He also has access to many Band abilities with other characters and the other Ninjas. His variety of weapons and armor has improved since the original game. Edge is fast and a decent character all-around, but excels in no area other than speed.

It is uncertain if Edge has an official theme, but the song "Hello, Cid!" is often played in moments where Edge is the spotlight character. During Edge's Lunar Trial the city of Troia's theme, "Troian Beauty", is played, which could hint the song may be his theme, as during the other characters' Lunar Trials it is always their theme that is played. "Troian Beauty" might have been chosen to represent Edge due his flirtatious personality and that the most attractive women in the world of Final Fantasy IV come from Troia.

Edge has appeared in the following games in the Final Fantasy series:

Edge has made key guest appearances in the following non-Final Fantasy games:

A costume based on Edge appears in Gunslinger Stratos 2.

The name "Edge" is a combination of the first two letters of his first and last names, Edward Geraldine.

In the English localization Edge shares his first name with Edward. Edward's original name in Japanese is Gilbert, preventing any given name conflict. They were likely given the name because they are both princes of their respective countries. [view · edit · purge]"Edward" is a common English given name that means "rich" and "prosperous"; several kings and nobles have shared this name.

"Geraldine" is the feminine form of the given name "Gerald". [view · edit · purge]Gerald is of Old German origin, meaning "spear ruler" or "rule of the spear".