Edge (エッジ, Ejji?) is a city built to the east of the remains of Midgar, after it was destroyed by Meteor. It appears in Final Fantasy VII: Advent Children and Dirge of Cerberus -Final Fantasy VII-. It was built on the outskirts of Sectors 3 and 4 by surviving inhabitants of Midgar after Meteorfall, who were trying to rebuild their homes and businesses, using reconstruction material found in the Midgar ruins with the help of some children orphaned by Geostigma and Meteorfall, who salvaged useful items in return for food and money. Denzel was among these children.

Following Meteorfall and the destruction of Midgar, there were many people who traveled to the town of Kalm to take refuge. Residential houses became emergency shelters and the inn offered free rooms to refugees, but the sheer volume then forced some people to live on the streets. The near-immediate introduction of a new disease that began to plague the populace made matters worse.

Under a threat from an unhappy public blaming the Shinra Electric Power Company for Meteorfall, Rufus Shinra, now residing in Kalm, concocted a plan to redirect the populace's energies toward rebuilding their homes. Using the wreckage from Midgar they built a new town on the eastern-side of the former metropolis. Employing volunteers, Rufus manipulated his then capturer, Mütten Kylegate, into beginning the town's construction, with Kylegate naming the town "Edge", before Kylegate's death at the hands of Kilmister.

The town continued to grow, with Reeve Tuesti, now commissioner of the World Regenesis Organization (WRO), contributing additional machinery and human resources from Junon. As the town grew, Cloud Strife, Tifa Lockhart, Barret Wallace, and Marlene moved into the city, building a new 7th Heaven bar. Barret left to settle his past, leaving Marlene in Cloud and Tifa's care. Cloud began operating the Strife Delivery Service out of the bar, delivering packages around the world, and the orphan Denzel came to live with them after Cloud found him collapsed at the Sector 5 slums church. Eventually however, Cloud abandoned the home, the three unaware where he went or why.

The Remnants of Sephiroth come to Edge seeking the remains of Jenova. Lacking a Reunion instinct to detect her presence, they kidnap the city's orphaned children who have been infected with Geostigma, promising to cure them and be a family together. Yazoo takes the children to the Forgotten City, where Kadaj activates their Reunion instincts so they can sense Jenova.

The Remnants return to Edge and stake a claim at the Meteor Monument in the center of town, believing Shinra has hidden Jenova's remains inside. Kadaj takes Rufus Shinra to a skyscraper under construction and summons Bahamut SIN to attack the city, destroying the Meteor Monument. As Reno and Rude battle Yazoo and Loz, Cloud and his old comrades defeat Bahamut SIN.

Rufus reveals he has been keeping Jenova's remains under his long white sheet, and hurls them off the building. The enraged Kadaj attacks Rufus and leaps off the building to catch the container. He and the other Remnants ride onto the Midgar Expressway and into the ruins of Midgar as Cloud gives chase.

Following the disappearance of 1200 people from Junon under unexplained circumstances, Edge's citizens began hearing shrieks and screams emanating from Midgar. Not long after, Edge comes under attack by an army known as Deepground, headed by the Tsviets Rosso the Crimson and Nero the Sable. After disrupting a Deepground raid at Kalm, Vincent Valentine is recruited by Reeve to assist the WRO in freeing Edge from the Deepground attack. After receiving a message from Weiss the Immaculate, declaring Deepground is going to purge the world, the WRO convoy on route to Edge is attacked and Vincent is forced to traverse the Midgar Wasteland to reach the city.

Arriving to an empty city, Vincent searches the fog-filled streets and meets Shalua Rui in search of her sister, Shelke Rui, one of the Tsviets. Finding an escaped kid Vincent discovers the majority of the city's remaining populace had been taken to a warehouse. In the warehouse Vincent is confronted by Rosso the Crimson who reveals Vincent is carrying a Protomateria that unlocks the secret to controlling Omega. As she attacks him to obtain the Materia, Vincent inadvertently transforms into Chaos, driving off Rosso but soon passing out. He is discovered by Shalua, who brings him to the WRO Headquarters to recuperate.

A week after Vincent defeats Weiss and Omega in the Battle of Midgar, Shelke is now living with Cloud and Tifa at 7th Heaven.

Edge is located in the northwest of Gaia's eastern continent, directly to the east of Midgar.

The central plaza of Edge, some time after the establishment of Cliff Resort as a care center for those stricken with Geostigma, Rufus Shinra suggested that Shinra build a monument within the plaza to "commemorate how the planet repelled the Meteor", and to also claim Edge as being owned by Shinra.

One year following the memorial's destruction by Bahamut SIN during the incident surrounding Sephiroth's remnants, the soldiers of Deepground occupy the plaza as part of their siege of the city. Vincent Valentine traverses the empty plaza, where the Meteor Monument is still under reconstruction, while searching for surviving residents and remaining WRO soldiers.

A public bar owned and run by Tifa with help from Cloud and Barret before their departures.

Originally a derelict highway, the WRO uses this highway to transport materials between Midgar's remains and Edge. The Highway is a massive toll-paid highway that stretches through the center of the city.

While still under construction, a vast portion of the highway was destroyed by the Turks in their pursuit of Yazoo and Loz as the Remnants in turn were chasing Cloud who was chasing Kadaj.

A warehouse located on the outskirts of the city, those captured during Deepground's occupation of Edge were brought to this warehouse where they were contained and moved to Midgar to be sacrificed to awaken Omega.

Defended by Rosso, Vincent inspects this warehouse and is confronted by Rosso, who reveals to him the Protomateria used to control Chaos under his possession.

The warehouse was also available as an arena in the Play Online Multiplayer portion of Dirge of Cerberus -Final Fantasy VII- in Japan.

Edge appears as a battle background in a Battle Music Sequence. 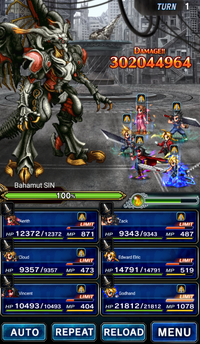 The city shares its name with the setting of a previous work of Square and Tetsuya Nomura, The Bouncer.

It appears that the LOVELESS play from Midgar's LOVELESS Avenue moved to Edge after Meteorfall, as there are posters and signs all over Edge, including inside Seventh Heaven. Some of the street signs in Edge illustrate the existence of a Silence Street, an allusion to the spell Silence. Find the Way Street, another street in Edge, is a possible allusion to the background music "Find Your Way" from Final Fantasy VIII. In Dirge of Cerberus -Final Fantasy VII-, a poster of Cloud's silhouette can be seen while traversing the rooftops surrounding Meteor Square.

Shalua Rui states there were supposed to be around 500 people still living in Edge during the raid by Deepground. It is unknown whether this was the city's estimated population or the number of those remaining after a mass evacuation. 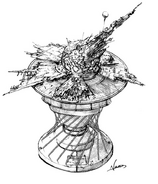 Concept art of the Meteor monument in Edge.

The central square of Edge.

Artwork of a street corner in Edge. 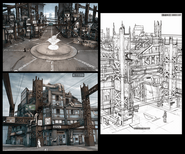 Rosso sitting on a crate surrounded by bodies.