The King of Figaro. Edgar breaks his alliance with the Gestahlian Empire and joins the Returners in their fight for freedom.

Edgar is a playable character in Final Fantasy Record Keeper. He could first be recruited with his brother Sabin during the Challenge Event A Fateful Coin Toss - Ascension and Freedom. Both later appeared in Forgotten Bond and Two Sides of a Coin. Edgar was also recruitable upon completion of the Bonus Quest, "Complete Figaro Castle Elite (VI)".

The elder Figaro's expertise in weapons and machinery makes him the perfect counterpart to his brother. Cast as a Knight, Edgar has the right ingredients for a tank—high HP and Defense along with solid Attack and a broad range of combat skills. Native swords and spears carry his signature Tools, which can help him deal heavy damage to a single target or cripple an entire group. Being unable to wield magic himself, Edgar relies on other party members for healing and support, a trait shared with the majority of Knights recruited here.

His default Soul Break is Auto Crossbow, which deals damage to all enemy targets at the expense of one Soul Gauge segment. The spear Partisan (VI) grants Edgar the Bioblaster. 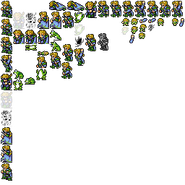