A subset of armor named "Machine" is partially named after Edgar's Tools: "Auto Crossbow" Armor, "Drill" Helm and "Chainsaw" Shield. However, the subset's weapon, Machine Gun, is not named after any of Edgar's Tools.

Edgar makes a cameo during the data install sequence. If the player repeatedly presses the

during the install, Edgar and Sabin will drop from the top. In-game, he serves as a tutor in the manuals.

As the Machine Gun is now an exclusive weapon of Laguna's, the weapon has been renamed "Air Anchor", meaning that all of the "Machine" subset is now named after Edgar's.

Edgar is a playable character.

The young king of Figaro is a consummate flirt, yet his heart is good and kind. When his brother Sabin wearied of the succession squabbles tearing their family apart, Edgar set him free - taking on the duties of the throne on the flip of a fixed coin.

Edgar appears as an unlockable character, and is obtained by collecting Gold Crystal Shards. His appearance is based of his Yoshitaka Amano art, and wields the Chainsaw as his weapon.

Edgar has the smallest list of Proactive abilities, giving him emphasis on using his larger list of Reactive skills. Edgar can also be used as an effective fighter, though ultimately he is outclassed by stronger characters, and thus players may need to focus using him as an effective defense card.

Edgar is an unlockable character, and is obtained by collecting Light Crystal Shards, after the player has already unlocked Celes Chere.

Edgar appears as a playable character. His initial weapon is the Heavy Lance.

Edgar's sprite.
Add a photo to this gallery

Edgar is an ally and a summonable Legend. He is depicted in his Final Fantasy VI outfit. His EX ability is Drill. 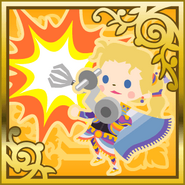 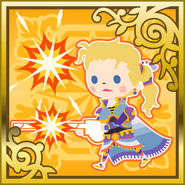 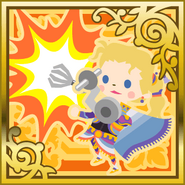 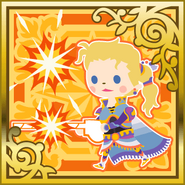 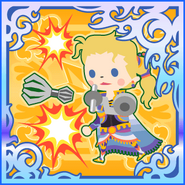 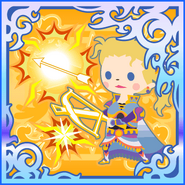 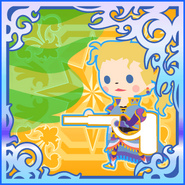 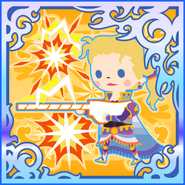 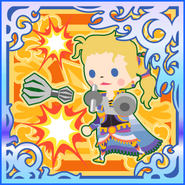 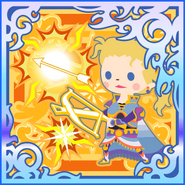 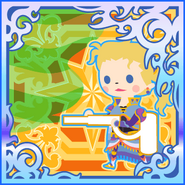 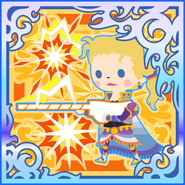 Auto Crossbow (UUR+).
Add a photo to this gallery 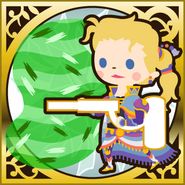 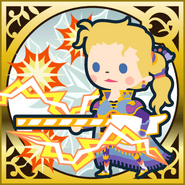 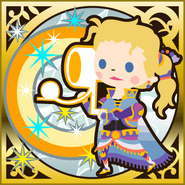 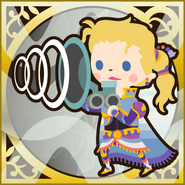 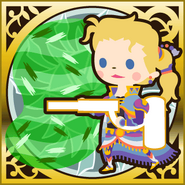 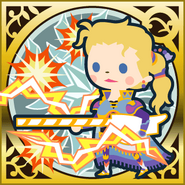 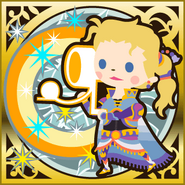 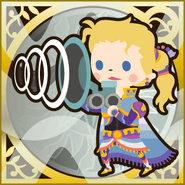 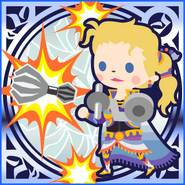 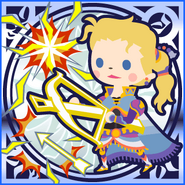 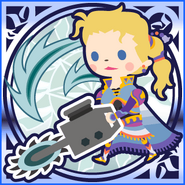 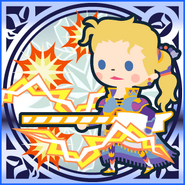 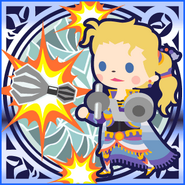 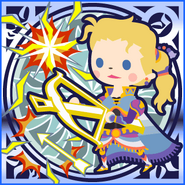 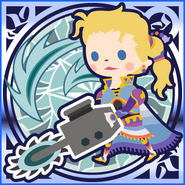 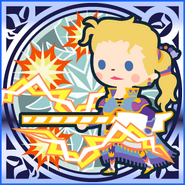 Flash (UUR).
Add a photo to this gallery

Edgar could first be recruited as a party member with his brother Sabin during the Challenge Event A Fateful Coin Toss - Ascension and Freedom. Both later appeared in Forgotten Bond and Two Sides of a Coin. Edgar was also recruitable upon completion of the Bonus Quest, "Complete Figaro Castle Elite (VI)". 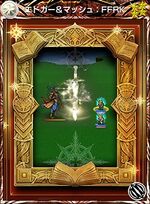 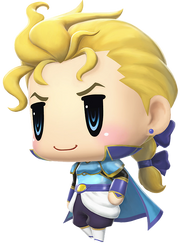 King of Figaro, lord of its castle, and a hopeless ladies’ man. The twins’ first run-in with Edgar immediately throws his allegiances into question. Just whose side is he on?

Edgar appears as a supporting character. He serves as the King of Figaro and works alongside the Bahamutian Federation for reasons unknown.

Notes: King of Figaro / Owns a big sand castle (sort of) / Loves the ladies / "The churl never gets the girl" / Voiced by a true FF fan

An Eye for the Ladies
Day after day, Edgar struggles with an ethical quagmire from which he just can't escape. On the one hand, he must flirt with all the ladies. On the other, he knows that this can be taken as rude, and one should never be rude to a lady. What to do?!

Additionally, Edgar still hasn't quite decided where to draw the line between "girl" and "lady." It seems that Reynn falls into the former category, and not the latter.

The Desert Castle
Edgar's castle rose from the sands with a tremor and a roar. Although its chain-like leash might suggest the Federation had a hand in such a trick, Figaro Castle's ability to submerge is uniquely its own.

Figaro Castle, Midgar, and the Underground Prison
Strap yourselves in, because we're breaking the fourth wall.

Figaro Castle is, without a doubt, the most preposterous facility in all of Grymoire. To be honest, it never made any sense. A castle that can burrow into sand? How does that even work?!

Well, we've ratcheted up the implausible factor to the max by strapping a facility named after FFVII's Midgar to the bottom of it, complete with DIRGE of CERBERUS's Mako Reactor 0. Add to the mix one boss straight out of FFIX—hi, Vivi! To top it all off, if you look at the submerged portion of the castle, it's painfully obvious from the construction that it's an evolved version of the drills on that desert prison in FFVIII...

Honestly, even we think we might have gone too far this time.

Eidolons as Living Structures
Enna Kros hints at this, but in case you didn't catch it: in every A-World, massive eidolons can take the form of buildings or weapons. In Grymoire, there are at least four known examples of this:
(And in fact, there's one more, but we'll save that for another entry.)

Eiko is Big Bridge Alexander's caretaker. The Eden of Balamb is guarded by Quistis, Squall, and SeeD. The Lute of Regnarok, Cornelia's guardian, has been revived and magically charged by Ramuh's Judgment Staff. And the Midgardian Ormr sleeps beneath Figaro Castle, under Edgar's watchful eye.

The Ormr stands out because no one has realized yet that it is an eidolon. And that suits it just fine for now, since it is able to convert Grymoire's geotic energy into mako whenever it requires more magic.

When eidolons and Mirages materialize in a new world, oftentimes they don't quite fully make it. When this happens, their primary characteristics are emphasized and reforged into a new form, such as a specialized facility or a powerful weapon. Long, long ago, some Cogna failed to push their way into Roksanne and Aris's world. The weapons they became were discovered and wielded by great heroes. But this directly led to a Cogna invasion, which in turn invited the creation of a new, terrifying type of being: the amalgamations known as the Exnine Knights.

The following is a list of quotes uttered by Edgar when talking to him.

Now then, what to tackle next...

Don't worry. Between the soldiers and Vivi's gang, Figaro will be fine.

Reynn! How good of you to come. Please, make yourself at home.
Hm? Oh, Lann. I didn't see you there.
You say you're a lady too, Tama? My sincerest apologies. Can I take you to dinner sometime to make it up to you?