Draw from Ultima Weapon or Tiamat

Tetsuya Nomura
Eden is a Guardian Force in Final Fantasy VIII. It is the game's ultimate summon, drawn from the optional boss in the bottom of the Deep Sea Research Center bonus dungeon. It can break the damage limit and has the rare Speed, Evasion and Hit junctions. Its unique abilities let the junctioner devour opponents for various effects, some of the most beneficial being permanent stat boosts, and to create items that teach abilities to Guardian Forces. Eden takes 1000 EXP to level up, most of any GF, and the same amount it takes for a playable character to level up.

Although it is debated what the exact nature of Eden is, the name and design indicate a link to the "Gardens", a theme in the game. The word "Eden" often refers to the Garden of Eden in the Bible. Gardens in the world of Final Fantasy VIII are paramilitary institutions, but the Garden buildings themselves can fly due to ancient technology, and have oval discs similar to the summon Eden. Eden invokes both heavenly and sci-fi imagery by appearing mechanical but being adorned with angelic feathers and bearing metallic female angel features on its lower body. Eden has a long needle on the bottom with a violet oval on the front. Aside from the female angel motifs on either side of it, within the oval one can make out a woman.

Eden is found at the bottom of the Deep Sea Research Center by drawing from Ultima Weapon, an optional boss. Eden can also be drawn from Tiamat in the final dungeon. If the player defeats both bosses without drawing Eden, it can no longer be obtained in that playthrough. Uniquely, both bosses can be available at the same time.

The Deep Sea Research Center is an unmarked island on the corner of the world map. The player can land there with the Ragnarok. After defeating Bahamut in the first area, the player must leave the place and re-enter to become able to descend underwater by climbing down the vine to a hole in the floor.

A series of floors leads down to the excavation site. The player must open up a door within each floor using units of pressure, but must conserve enough units (10) for the final lock at the bottom of the excavation site to fight Ultima Weapon.

There is a terminal buried underneath the rubble in level 1. Examining it gives the player 20 energy units, 4 of which are spent opening the door to level 2. Squall can return here at any time to reset the steam levels.

Levels 3-5 are divided into three sectors each. The sector the player is in is determined by how many units they spent to open the door leading into the level, indicated by one of three yellow lights near the door lighting up. Sectors 1/4/7 are associated with the highest cost (4 units), 2/5/8 by the medium cost cost (2 units), and 3/6/9 by the lowest cost (1 unit). Once in a sector, the player cannot switch to a higher cost sector, but can switch to a lower cost sector. If one were to spend 4 units on level 2→3, they would be in sector 1 and would have access to sectors 4, 5, and 6 for level 4. But if 2 units were spent there, they would be in sector 2 and would only have access to sectors 5 and 6.

The only difference between the sectors is that the player needs to spend 2 units on level 2 to access the steam room on level 3, sector 2. Other than that, they can use 1 unit to proceed all the way to the bottom. The steam room requires 4 units to unlock, but contained within is a terminal that supplies the party with 7 units.

If the party uses Zell (must be one of the party members) to force open the jammed door on level 6 leading into the excavation site without using any pressure units, the party will encounter a number of fixed battles, which cannot be avoided. The random encounters can still be avoided with the Enc-None ability or the Remastered version's "turn random encounters off" cheat. The player only gets one chance to have Zell open the door on the last floor. If the player chooses to not let him open it, he will never offer to open it again even if the player resets the steam levels.

When the party reaches the bottom, Squall can use the last of his pressure units to reactivate the excavation site and fight Ultima Weapon. There is a hidden save point within the area.

Obtaining Eden in the Steam version earns the player the achievement Eden.

When Eden is summoned, the screen blacks out. A blurry transmission of Eden's head and body plays, akin to satellite wave telecommunications interference. Eden descends from the stars, its size eclipsing the opposition, casting an enormous shadow and parting the clouds in the atmosphere. Eden's energy barrier encroaches the foes into the GF's dimension. The entire planet transforms into an iridescent clockwork sphere and is used as a cannon, firing the foes off into space. As the beam reaches the nearby galaxy, the energy interferes with the stable black hole of the galaxy's bulge. Eden's attack is known as Eternal Breath.

The attack deals non-elemental damage to all opponents and can break the damage limit even without the Boost ability. With all GF abilities learned, the player can easily boost the attack to the full 250%, considering it also has the game's longest summon animation, at 72.6s. At the maximum of its power, Eden can deal 60,000 damage to all enemies. Eternal Breath ignores enemy Spr.

The below values are the base compatibility values with all playable characters at the start of the game. Although Seifer and Edea cannot junction Eden in a normal playthrough, default values still exist.

Abilities learned naturally by Eden are listed below:

Eden is the final Level 9 GF Card in Triple Triad used for playing the minigame and for turning into 3 Monk's Codes with Quezacotl's Card Mod. It drops from Ultima Weapon. 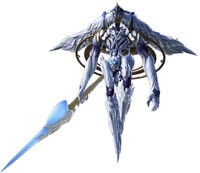 Eden is the focus of the raid of the same name. Being the first sin eater, it brought about the Flood of Light to The First after Ardbert and his compatriots defeated the Ascian Loghrif.

By the events of Final Fantasy XIV: Shadowbringers, Eden stands in a state of inactivity in the Empty - a region of Norvrandt that is drowned in the primordial light of the Flood. Throughout the events of the first tier of the Eden raids, the Warrior of Light uses Eden's powers to aid in the restoration of the First.

Balamb Garden is a large Mirage named "Eden", referring to the possible link to Final Fantasy VIII Gardens and their technological prowess; in World of Final Fantasy that connection is the mechanical Cogna.

Eden appears on a promotional card depicting its official artwork by Tetsuya Nomura. The card is Shine-elemental.

Dissidia Final Fantasy has a trading component with the name of "GF Eden". It can be acquired by fighting the Seifer Special Friend Card, Level 100 Ultimecia. It is used to create the Bone Mail.

Eden is a fal'Cie in Final Fantasy XIII, and is the fal'Cie responsible for all of Cocoon's base functions, and Cocoon's capital is named after it. 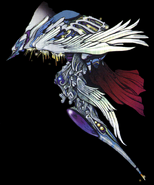 [view · edit · purge]Eden means "place of pleasure" in Hebrew. It often refers to the Garden of Eden in the Bible.

In the French localization Eden is named Orbital, and Eternal Breath is called Otono.

In the debug room Eden is referred as Bartandres (バルトアンデルス, Barutoanderusu?, lit. Baldanders). The Barthandelus fal'Cie from Final Fantasy XIII is an alternate romanization of the same Japanese name. [view · edit · purge]Baldanders is a shape-shifting creature of Germanic literary myth. Baldanders was first conceived by writer Hans Sachs after reading the description of Proteus in The Odyssey. The Baldanders is a creature symbolic for the continual change in nature and society, as well as the importance of familiarizing oneself with the common from another perspective. Its name is derived from the combination of German words for "Soon" (Bald) and "Another" (Anders).