Relm: I couldn't miss the chance to practice my drawing!
This article is in need of a few pictures. Perhaps you can help by uploading a picture of Bravely Second Swordmaster and English version of Bravo Bikini.

Initially dispatched by her father—the Grand Marshal of the Eternian Forces—to capture Agnès, Edea eventually joins Tiz's party in their quest to seek the truth and restore balance to the world.

Edea Lee is a playable character in Bravely Default and Bravely Second: End Layer, who also appears in Bravely Default: Praying Brage. Initially a member of the Eternian Sky Knights sent to capture the wind vestal Agnès Oblige, she soon grows opposed to the ruthless acts they commit and allies with Agnès instead. Over the course of the party's journey, Edea must confront her fellow countrymen as a traitor.

A beautiful girl who served under the black mage when Caldisla was set alight. Unable to forgive the duchy's brutality, she switched allegiance to the vestal.

An eighteen-year-old girl hailing from Eternia. On first impression, she appears to be a spoiled princess type. However, while strong-willed and opinionated, she is also kind and filled with a sense of justice. She never shies away from a conflict.

Edea has long blonde hair with a black and red bow, and marine-colored eyes. She wears a short high-collar red dress with a mail-plated skirt. Her sleeves are black and her collar is white. She wears white tights and thigh-high black boots and black gloves.

In Bravely Second, Edea's hairstyle is slightly altered and she now wears a white and aqua bow. She wears a short aqua dress with plate-mail on each side. She wears silver gauntlets and silver armor-plated boots. The artbook indicates her outfit is designed from Ringabel's Bravely Default Freelancer costume.

When using the asterisks, with the exception of her bow, Edea's appearance changes according to which job she is using.

Edea's Garb is a tight, black form-fitting outfit with armor-plated chest piece, sleeves, and boots. She has platemail on her hips and a decorative hairpin under her bow. The Plain Tunic is simply her Freelancer outfit. The Bravo Bikini consists of a white tube top with a black bow and black bikini shorts. In the Japanese release, she wears a skimpy white bikini top and black bottoms. Two long pieces of cloth hang down on each side and are adorned with black bows. She wears long black gloves and black and white boots. The Military Cadet-in outfit consists of a short black dress with white stripes and a white shrug around her shoulders. She wears white tights and black boots with a brown bag hanging around her left shoulder.

Alternate outfits also appear in Bravely Second and can be purchased at various locations. Edea's Chompette's Coat is a green frog-like hooded shrug with red button "eyes" and a green dress with orange gloves. She wears silver armor-plated boots. Her hair is kept in the hood, except for two strands which stick out on each side. The Washcloth outfit is simply a towel wrapped around her. She wears her hair in a high bun with a white band and is barefoot. The Freelancer Garb is simply her default outfit. Her default outfit from Bravely Default returns under the name Sky Knight Garb.

Edea shares a few outfits with Agnès from Bravely Default. The first is the Bravo Bunny outfit, which is a skimpy white one-piece teddy. She has black gloves with a white bows on the side and black thigh-high boots with a white bow on the back of each. She wears a white rabbit ear headband with black markings on the tips with a black bow with white lining on the left side. The second is the Knight's Tunic outfit where she wears white corset-like one piece outfit with a black center and gold accents. Her "shorts" are black with red and gold stripes. She has a red sash across her right shoulder and black fingerless gloves with a black pom-pom on each hand. She wears silver high-heels with black legwarmers and a red ribbon tied around her ankles and armor knee braces. Her headband is silver with a black bow sticking off the right side.

Passionate and quick to anger, Edea is a tomboy with a strong sense of justice. Her "black and white" world view leads her to condemn those she considers evil. Raised in the duchy and its anti-crystalist views, Edea spent most of her time training under Kamiizumi who taught her respect and honor when dealing with allies and foes alike. When Edea witnesses the atrocities committed by the Sky Knights she wants to see the truth of the world with her own eyes. By Bravely Second, Edea has matured. Edea loves food, especially sweets, but the food she cooks tends to be unorthodox.

Edea was born around the time that her father led the Anti-Crystalists against the Crystal Orthodoxy and established the Duchy of Eternia. She was trained by Nobutsuna Kamiizumi in the way of combat and attempted to win her father's respect. At age 10, Edea and Alternis Dim attempted to hunt down an "abominable snowman", which was revealed to be a runaway Golem, and nearly got herself killed. She was saved by Barras Lehr who teased her for fainting at the sight of his face. When she came to at a camp he took the kids to spend a night before returning them home.

Receiving her katana Ise-no-Kami from Kamiizumi as his way of blessing her new status, Edea is deployed as a member of the Sky Knights to head to Caldisla to capture the wind vestal Agnès Oblige. While accompanying Ominas Crowe Edea is disgusted with the Sky Knights' conduct in harming innocents to achieve their goal. When Ominas is willing to kill their own men to kill Agnès, Tiz Arrior, and Ringabel Edea chooses to aid the trio and wins their trust while dealing with Ringabel's advances.

Once her betrayal is brought to light, Edea continues to fight her fellow countrymen despite Alternis making attempts to secure her. While in Eternia she confronts her father and the ensuing fight results in Braev Lee being wounded to the point he would no longer be able to use a sword. After the crystals are awakened, the group battles Alternis who attempts to stop them from "destroying the world" under Braev's orders. After the party defeated him, Edea is shocked to witness Alternis's exposed face being identical to Ringabel's before he fell over the railings of Grandship.

After restoring the crystals in several worlds, Edea learns Ringabel is the Alternis of another world who ended up in her original home after being knocked off Grandship while it was stationed in the Holy Pillar. Ringabel later offers to take her to a restaurant in Florem for a romantic dinner, but she turns him down. When he affirms his offer is genuine, she responds that she knows it and appreciates it because it was genuine, but still turned him down.

After Ouroboros's defeat Edea returns to Eternia and is reunited with her parents while hugging a healthy Mahzer. She arrives to the chamber of the Council of Six, vowing to make her father's ideals come true as she is promoted to captain of the ducal guard.

Edea became good friends with Agnès and Tiz when they saved the world together in their last adventure. Edea may be hot-tempered, but she has a heart of gold.

In the aftermath of Ouroboros's destruction, while carrying Ringabel's journal on her person, Edea helps rebuild her country as the knights-captain of the Eternian Ducal Guard. She also works with Agnès in achieving peace between the Duchy and the Orthodoxy. Upon hearing of Agnès's kidnapping, she heads off on her own to the various towns of Eternia in the hopes of learning more about the situation. She comes across Yew Geneolgia being attacked by Bella, saving him. The two are later joined by Magnolia Arch and Tiz to rescue Agnès from the Glanz Empire.

Edea and the others use the SP Hourglass to stop Denys Geneolgia from kidnapping Agnès as well as the threat posed by the Glanz Empire. Afterward she is approached by her father who wishes her to succeed him as Grand Marshall of the duchy by testing what she considers to be the best traits of a leader. Once Edea passes the test, Braev retires to the Yulyana Woods Needleworks while Edea oversees the peace between the Orthodoxy and the duchy. 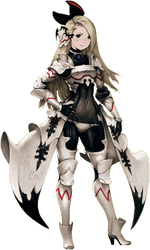 In one reality of Luxendarc affected by Airy accessing the Holy Pillar, Edea's search for a missing Agnès resulted in her being transported 200 years into a future where Luxendarc is no more with the continent Crystalica in its place. Taking on her friend's surname, Edea Lee Oblige becomes the wind vestal for the country of Windian in hopes to find her friend.

Edea has balanced stats yet leans towards physical classes as her high strength and defense make her perfect for Knight, Monk or Templar. She suffers from poor magic stats and agility, but her MP is fairly good and her HP is tied with Ringabel.

This gallery is incomplete and requires Swordmasters added. You can help the Final Fantasy Wiki by uploading images.

Edea is voiced by Mai Aizawa in the Japanese version.

She is voiced by Cassandra Morris in the English version. She shares this voice actress with Mutsuki Chiharano from Final Fantasy Type-0.

When have I believed? As a mere child without a doubt in the world.

Why do I love? - Because of those dear who raised me.

For the first time I kicked off from the ground towards the sky, I trembled alone.

Black or White? What is the right thing to do? I want to ascertain it for myself

Where was I bound? In a shell I could not break on my own.

What I am looking for? Something to believe in despite the pain.

I looked behind I home I've left, seeing the wind dancing in a sky while trembling with freedom.

Black or White? Who is in the right? I want to seek for myself.

I understand that justice overflows in the world yet the conflicted repeatedly battle each other.

Yet, I want to choose my own path in even a world of pure grey.

Black or White? No matter how long the nights are, I will never give up.

Black and White, Right now I'll live for the now.
Because I want to protect the world, I'll amass all my Bravery and fight!

It was that day when a baby bird flapped her wings towards the endless sky.
With the wind flowing under her wings, she now heads towards the unseen horizon.

Edea is an obtainable unit.

Edea is a character and summonable vision. She retains her original appearance. She serves as a character representative from Bravely Default.

Edea is an obtainable character. Edea comes with the Freelancer, Monk, and Vampire jobs, each having an active and party ability.

Edea appears as a support character.

Edea appears as an obtainable card.

Edea appears as an obtainable card.

Edea appears as an obtainable character.

Edea makes an appearance as a collaboration character. Her outfit is also available for players to wear.

Edea appears as an obtainable character.

[view · edit · purge]"Edea" is a female name with French and Australian origins. It may also be derived from Greek mythology, specifically from "Medeia" (Latinised as "Medea") who was a sorceress; her name also means "cunning".

[view · edit · purge]Lee is an English name derived from Old English leah for "clearing; meadow". Li is the pinyin and Wade–Giles romanization (spelled Lí, Lǐ, or Lì when pinyin tone diacritics are used) of several distinct Chinese surnames that are written with different characters in Chinese. Lee is also the typical romanization of the common South Korean surname I (Hangul 이) and North Korean surname Ri (리).

In Bravely Default, Edea's name is word play on "Ideally".