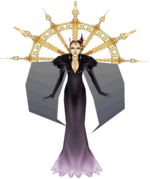 Edea appears as a boss and a temporarily playable character in Final Fantasy VIII. She has no upgradable weapon. Her Limit Break is Ice Strike, which hurls large icicles at the target, and is unaffected by her Crisis Level.

Edea is a temporary playable character, controllable during the party's trek across the Great Salt Lake and during the time Lunatic Pandora attacks Esthar City. She must equip Guardian Forces to use magic in battle, and while she has no weapon, she is able to use the Attack command without one as she strikes her target with a small blast of energy.

Edea's weapon is called "None", to simulate her not wielding a weapon while still designating her one in the game code. It only has 20 Strength and 97 Hit Rate, and it can't be upgraded. Edea has high Magic and Spirit scores, and has good compatibility with every Guardian Force (see below). Her HP, Strength, and Vitality are low, and her Speed and Luck are not exceptional, either. She is the epitome of the traditional Sage class, excelling at magic, but little else.

Edea leaves the party after the player either fails to board the Lunatic Pandora with Zell's party, or when they are ejected from the Pandora by Mobile Type 8. When Edea leaves, the game attempts to give her Magic stocks to the other party members spell by spell, but if all the other characters already have 100 of the spell/have 32 other spells, her Magic stock is lost.

Her intro pose is to cross her arms onto her chest before opening them up. A distinct sound can be heard before she opens her arms out. Her victory pose is to raise her arms, then close her hands together and bow.

Her Limit Break, while powerful, is limited, as it only deals damage to one target. Her Limit Break is Ice Strike that hurls several large icicles at the target. Edea's Limit Break's strength is unaffected by Crisis Level and its attack power is 120.

This Limit Break is also seen at the end of the parade in Deling City where she uses it on Squall with near-lethal effects. Ice Strike is a subset of Edea's skillset called Sorcery (魔導, Madō?).

Edea is fought twice: the first time at the parade, and the second in Galbadia Garden. Before fighting Edea the first time Squall faces off against his rival, Seifer, alone. After defeating him, Rinoa and Irvine arrive to help Squall, and Edea takes the stage. The battle is scripted and can't end in a Game Over, but if the player defeats Edea they get battle rewards.

When confronting Edea for the second time at Galbadia Garden, the party must again defeat Seifer before they can touch her. During this second confrontation, the party can draw the Guardian Force Alexander from her.

Edea carries her own Triple Triad card and can be challenged at Edea's House. It is one of the best cards in the game, but Edea is arguably the best card player in the world, having smart AI. The difficulty of winning the card from her is compounded by her being playable at the Centra region that uses all the rules of the game. Players are first able to challenge her when she is met at the orphanage. One can use "Rule Manipulation" to keep the contest as simple as possible as Edea uses the Same, Plus, and Combo rules to devastating effect.

The Edea card is one of three cards to feature multiple As (the other two are Rinoa and Doomtrain). Edea turns into 3 Royal Crowns with Quezacotl's Card Mod.