Very well. Let us show these mortals the true power of the Echo... The power to break down the barriers of existence!

The Echo (超える力, Koeru Chikara?, lit. Transcending Power) is a special ability that some rare individuals possess in Final Fantasy XIV. The Students of Baldesion is a Sharlayan institute devoted to studying the Echo and its connection to the "Umbral Calamity" phenomena.

Those who have been "gifted", as the members of the Path of the Twelve call it, can resonate with other people's souls—and see their past, albeit not able to interfere or change it—as well as being able to speak every language in the world. The Echo prevents its user from being tempered by primals, and advanced users can transcend their mortal forms.

All these things are the manifestations of your talent. Yours is the power to transcend the boundaries of the soul—a power known as the Echo. The Echo allows you to pass through the walls of a man's soul, and hear the resonations of his past. You will be there in his memories, and see things as he saw them. You may even interact with that which you see, though you cannot change the outcome of events. For another blessing, the Echo will enable you to know a man's mind even if you cannot comprehend his words. In short, the Echo is a truly extraordinary power. And this power is strong within you. It is only a shame that we cannot use it whensoever we choose.

Minfilia to the Warrior of Light

In truth, the Echo is a fraction of the power of an Ascian, a residual power that normally rests within all life in the Source and its reflections. Those who awaken to the Echo often experience a vision of a star-shower falling from a burning sky. They hear Hydaelyn's voice, assuming the Echo was bestowed on them by the goddess, rather than her stirring the memory of a past life. As a result, many assume that those who possess the Echo appear whenever a Calamity draws near, such as with the fall of Dalamud in the Seventh Umbral Era.

The Echo's most profound ability is viewing memories of another being. This occurs without the user's control, but can yield information they would not obtain otherwise. These visions can even be from millennia ago, as the Warrior of Light once witnesses an event from Emperor Xande's life in the Third Astral Era.

A more subtle effect is the implicit understanding of languages. The Warrior of Light understands foreign languages, shown to the player with altered dialogue boxes. The most obvious instance of this is whenever Ascians speak.

Those with the Echo are immune to primals' tempering, and thus only those blessed by the Echo can fight them. Zenos yae Galvus implies this ability is more than mere "resistance" to primals, as he can fuse with and take over Shinryu with the power of the Echo, and Ysayle Dangoulain can summon Shiva with her own body as the vessel and control her powers.

The exact powers granted by the Echo vary in utility and potency; Krile can sense the traces of a person's soul, and even track it through the Lifestream through a potent enough focus. Fordola rem Lupis's use of the Echo—through the adaptation of the Resonant abilities—seems to give her limited clairvoyance via detecting minor shifts in the aether of others that allows her to perfectly predict and avoid enemy attacks. Mikoto Jinba is able to see into the future with her version of the Echo.

Some users have exhibited the power of metempsychosis; a Sahagin Priest restructured himself by entering the bodies of fellow Sahagin despite being mortally wounded by Merlwyb Bloefhiswyn. It is implied this is the principle by which Ascians manifest in Hydaelyn. Lahabrea and Igeyorhm also use the Echo to fuse into a more powerful form, called Ascian Prime.

The Warrior of Light awakened their ability to use Echo upon seeing a Starshower Hydaelyn conjured prior to being invited to the Merchant Wards of Ul'dah to join the Path of the Twelve. The true nature and origins of the Echo were unknown, but according to Ifrit, there was a deity who gave the power of Echo to everyone who currently had it, but not even he knew who the deity is.

Anyone who possessed the Echo was branded as a beastman by the Garlean Empire, and therefore was considered an enemy of the Empire.

The Echo is linked to the mothercrystal, Hydaelyn. The Warrior of Light discovers an affinity with the Echo after finding the first Crystal of Light complete with a vision of the starshower. They soon witness visions of the Scion they had encountered.

During their quest, the Warrior of Light has various visions depicting the past, such as the leaders of Eorzea at the Battle of Carteneau, or the steps that led to an altercation in Ul'dah. This trait leads to them being invited to the Scions of the Seventh Dawn, the successor organization to the Path of the Twelve. Minfilia Warde, and later the Warrior of Light, are approached by a white-robed Ascian named Elidibus, who claims the Echo is a gift that the Warrior has yet to master, and in time it may allow them to see the Ascians for who they really are. He further implores them to understand the true nature of the Echo.

Taking Elidibus's words into consideration about "the true nature of the Echo," Minfilia accompanies Merlwyb Bloefhiswyn and the other Scions to the Sahagin's spawning grounds after learning they mean to summon Leviathan. During the ritual to summon the Lord of the Whorls, they witness the Sahagin Priest has achieved an advanced stage of the Echo that enables him to enter the bodies of his fellow Sahagin upon death, only to be absorbed by the newly awakened primal. Later, Ysayle Dangoulain, another bearer of the Echo, channels the primal Shiva into her body and transforms into the Lady of Frost.

The Ascians reveal that they can use the Echo to combine into Ascian Primes. Lahabrea refers to Echo as the "power to break the barriers of existence". Similar to the Sahagin Priest, he ends up being absorbed by the primal King Thordan once he's struck down.

After the attack on Rhalgr's Reach, Krile is captured by the Empire and used in several experiments meant to artificially give regular humans the powers of the Echo, allowing pure-blooded Garleans to manipulate aether. Aulus mal Asina chooses Fordola rem Lupis as a guinea pig, both to test the procedure and to see its effect on a non Garlean; the experiment turns Fordola into a so called "Resonant", able to use the powers of the Echo via artificial means.

Fordola becomes able to feel minor changes in the aether of others, giving her the ability to predict and avoid any attacks, making her practically invincible in combat, easily defeating Lyse Hext and Alisaie Leveilleur despite never having fought a Red Mage before. Urianger Augurelt makes a device that allows the Warrior of Light to temporarily disrupt Fordola's aether, allowing her to be defeated and captured.

After being defeated at Ala Mhigo, Zenos yae Galvus reveals he also has the power of the Echo. He tells the Warrior of Light the Scions have no idea about the full extent of its power, and uses his Echo to fuse with Shinryu, taking control of the primal dragon and attacking the Warrior of Light's party. Despite committing suicide following his defeat, Zenos would transcend his being and take possession of an Ala Mhigan Resistance member and a Centurion to reclaim his body from Elidibus and to prevent his father from using Black Rose to eliminate the Warrior of Light.

Zenos would make his way to Garlemald to reclaim his body from Elidibus. Following Emet-Selch's defeat in the First, Zenos retrieves his body from Elidibus and murders Varis. He easily fends off Estinien Wyrmblood and Gaius Baelsar and demonstrates Ascian-like powers in the confrontation.

In addition to its plot significance, the Echo is a status effect that appears in certain duties. It is applied to the entire party, increasing their HP, healing, and damage, though the strength of the boost and when it is applied varies.

The Echo status may appear with the following conditions:

The Echo is typically only applied to content in subsequent version updates in order to allow more casual players the opportunity to experience the content after competitive players have beaten it at the original difficulty. The Echo only affects the players' attributes; it has no effect on fight mechanics. The player can turn it off like any other buff if they wish to take on the duty without the extra help, and the "Silence Echo" option in the duty finder will prevent it from applying at all.

In the original release, the Echo plays a role in most class quests. As such, even if the player were to reach rank 20 they would be unable to begin any class quest before finishing the fourth main storyline quest, wherein the Echo is awoken in the player character.

During most Echo visions the theme "The Echo" will play. The theme is used exclusively in Echo visions, and some scenes where it may not be immediately apparent that a vision is happening this theme can be a giveaway. 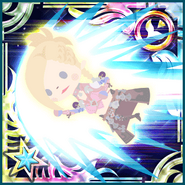 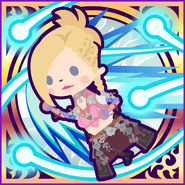 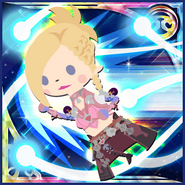 In the original release, the memory viewing aspect of the Echo was presented as the user being physically present for and interacting with the memory, with the memory adapting to accommodate their presence as though they were meant to be there. Despite this, they could not actually change the events that occurred in the memory. In the introductory scenarios, the player character was presented as being unaware of the Echo, and when the visions occurred the scene would transition seamlessly from the present day to the vision. To the player, the only indication of an Echo was a minor warping sound effect when they began and ended, and the presence of the musical theme "The Echo". After learning of the nature of the Echo from Minfilia, the warping sound effects became more prominent and began being accompanied by visual effects as well to make it obvious when a vision was occurring.