You have done well to come this far... but this is as far as you go! The darkness will engulf the world and return it to the Void!

Echidna is a boss from Final Fantasy III located in the game's final area, the World of Darkness, at the southwest portal. Echidna is one of the four guardians of the Dark Crystals, guarding the Water Crystal of the Dark World. Cloud of Darkness orders it to kill the Warriors of Light.

The party's Sages should cast Haste on the Ninjas in the first round, then act accordingly: anyone who is petrified, should use a soft on the petrified ally, while the Sage casts Bahamut; when Echidna uses Quake, both Sages should use Cure4 and if she uses Drain, one Sage should heal with Cure4 while the other one use Bahamut or another strong spell (like Flare or Holy).

Echidna knows the spell Tornado, which, if successful, reduces the party's HP to single digits, and Death which knocks one character out. The battle is easily survivable despite the effects caused by Tornado and Death, since Death can be negated by equipping a Ribbon or Aegis Shields, and Tornado has a low chance of hitting, making Quake and her physical attacks the only thing worth worrying about. A Viking should be used to draw Echinda's attacks with Provoke, and minimize the potential damage by equipping two Shields (one should be the Aegis Shield to negate status effects). 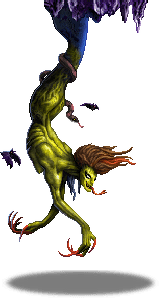 Echidna reappears in the Dawn of Souls and 20th Anniversary remakes of Final Fantasy, as a bonus boss in the Earthgift Shrine. She also appears in Final Fantasy IV: The After Years in a similar fashion.

[view · edit · purge]In the most ancient layers of Greek mythology, Echidna was called the "Mother of All Monsters". Echidna was described by Hesiod as a female monster spawned in a cave, who mothered with her mate Typhon. Her face and torso is that of a beautiful woman, sometimes depicted as winged, but always with the body of a serpent. She is also sometimes described as having two serpent's tails. She was said to be the mother of such famous Greek monsters like Cerberus and the Chimera.