Random pieces of coral (one to five at a time)

Ebot's Rock is a bonus dungeon in Final Fantasy VI, located north of the town of Thamasa. It is accessible after the player visits Thamasa with both Strago and Relm in the party; if the party tries to visit earlier, the cave entrance does not appear on the world map. Ebot's Rock is the lair of Hidon, a legendary monster that Strago and Gungho hunted in their youth.

Fifty years ago, Ebot's Rock was an island cave north of Thamasa where Hidon lurked. Strago and Gungho hunted the beast together, but could never find it. Eventually, Ebot's Rock sank beneath the ocean and Strago gave up the hunt.

After the cataclysm, Ebot's Rock rose above the sea again and the Hidon returned. When Strago returns to Thamasa with his granddaughter Relm, he is told that Gungho has been injured, who claims he was wounded in a battle with Hidon. Through reluctant to confront the beast that he wasted many years of his youth hunting, Strago assures Gungho he will be avenged and sets out to Ebot's Rock.

Eventually, Strago and the party are able to find and confront Hidon and defeat him. A jolly Strago returns to Thamasa to brag about his victory to Gungho, and Relm secretly informs Gungho she knows his wounds were fake to motivate Strago to hunt the Hidon again and settle one of his life's failures.

A time later, Hidon returns to Ebot's Rock and can continue to reappear indefinitely.

Ebot's Rock is unlike any other dungeon in Final Fantasy VI in terms of navigation and layout. The dungeon is made up of disconnected caverns and the party has only a small circle of light to see within. Instead of traveling between areas directly, the party steps on floor switches that teleport them to another part of the cave. These teleportations are virtually entirely random and include the possibility to teleport the player to the same area they were just in. The cave includes a save point, an area with a sapient treasure chest with Hidon lurking beyond it, and several other caves of varying size.

All treasure chests in Ebot's Rock contain a random number of pieces of coral, from one to five at a time. These chests refill each time the player teleports. The game does not keep track of how much coral the player has in the menu.

Hidon's lair is blocked off by a sapient treasure chest that demands the party feed it coral to make it move. The party can find coral in chests throughout the cave, which randomly contain one to five pieces. The party must feed the chest at least 22 pieces of coral all at once to appease it - feeding it some at a time accomplishes nothing. It is only possible to appease the chest's appetite when Strago is in the party, else it will continue to insist it has not been fed enough and refuse to let the party pass.

As navigating the dungeon is entirely up to chance, the party has little recourse but to move about at random, opening chests when they find them and keeping a mental tally of how much coral they have. Once they have enough, they must teleport back to the chest and feed it, and then progress up to face Hidon. The "reward" for defeating Hidon is Strago's ultimate Lore, Grand Delta - Hidon is the only enemy in the game to use it, and does so only if its accompanying Erebus are defeated.

If Strago misses on learning Grand Delta before defeating Hidon, the party can continuously speak to Gungho in Thamasa and he will eventually say that Hidon has reappeared, triggering the option to fight it again in Ebot's Rock.

Due to the random nature of moving about Ebot's Rock, yellow tiles are floor switches that teleport the party, green tiles are the spots they may appear at. 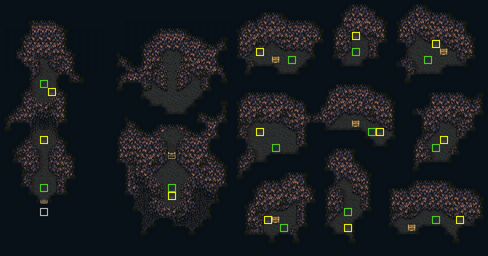 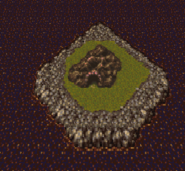 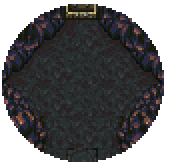 The cave inside Ebot's Rock (SNES).