Final Fantasy Wiki
Register
Don't have an account?
Sign In
Advertisement
in: Characters in Final Fantasy IV: The After Years

We cannot afford to have Eblan's traditional ninja arts fade away into history, Master.

The Eblan Four are disciples of Edge Geraldine in Final Fantasy IV: The After Years. The group consists of Gekkou of Fire, Izayoi of Water, Tsukinowa of Wind, and Zangetsu of Thunder.

They also have different equipment draws, with Gekkou using hammers and axes, Izayoi using bows and whips, and Zangetsu using spears, while Tsukinowa is the only one of the four without unique weapon class but also the only one capable of dual wielding. Compared to Edge, they each focus on specific strengths, while Edge is better rounded, as he learns a larger variety of Ninjutsu skills and has more balanced stat growth.

Gekkou and Zangetsu appear briefly prior to Edge's departure for the Cave of Eblan, where they agree to stay behind and guard the castle in his absence.

The Eblan Four are the focus of Edge's Tale in the game, each being sent out to gather reconnaissance about other regions of the world before returning to Edge. They are among the handful of characters in the game who can be permanently lost—if any of them perishes in their part of Edge's Tale, they cannot be used later in the game when all the party members assemble.

If the player successfully completes their quests, they will rejoin Edge in the final part of the tale and accompany him until the end. Gekkou is unique in that he can be permanently lost not only if he dies in battle, but also if the player answers "Yes" when asked to challenge the Mysterious Girl when Gekkou meets her, as she will instantly cast Meteor and kill him. To avoid this, the player must choose not to confront her.

Each of the Eblan Four has one Band ability to be used by combining with one of the other members. The four together can use the "Wheel of Elements" Band, and with Edge can perform the five-way Band "Ultimate Art: Advent of Phoenix". Due to their time undercover in the regions of the world they can Band with characters from those regions. Gekkou can Band with Yang, Izayoi can Band with Leonora, Tsukinowa can Band with Palom, Porom and Ceodore, and Zangetsu can Band with Luca. As the only female of the group, Izayoi can also partake in Bands involving the other female party members of the game. 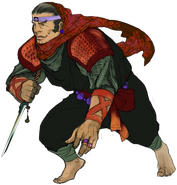 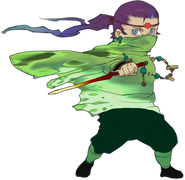 Zangetsu of Thunder.
Final Fantasy IV: The After Years setting
Community content is available under CC-BY-SA unless otherwise noted.
Advertisement