Relm: I couldn't miss the chance to practice my drawing!
This article is in need of a few pictures. Perhaps you can help by uploading a picture of add images for the Locations subsections that lack them.

Eblan, also known as Eblana, is a location in Final Fantasy IV. It is a kingdom on the southwest island on Earth's Overworld, near the Tower of Babil. It is ruled by a clan of ninjas, and their most powerful being the playful Edge, the prince of Eblan. Although the castle is situated on grassy plains on the world map, the field surrounding the castle on the main castle map is shown a desert.

The party must land near Eblan to reach the Cave of Eblan but visiting the castle is optional and can be done as soon as the party defeats Cagnazzo. It holds many treasures behind hidden passages. 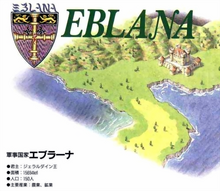 At an unspecified point, Eblan was attacked by Rubicante, and the King and Queen of Eblan were abducted. The kingdom's citizens fled to the Cave of Eblan to the west and planned to mount a counterattack by digging a path to the Tower of Babil, spearheaded by prince Edge. After Zeromus has been felled and peace restored to the world, Edge returns to the castle with the rest of Eblan's citizens and they begin rebuilding with Edge as their new king.

Gekkou and Zangetsu are asked by Edge to guard the castle has he heads out to the celebration in Damcyan, but they tell him it ended hours ago. Edge replies he'll see that for himself and heads for the Cave of Eblan.

When Edge notices the return of the Red Moon he worries what it means for the Tower of Babil. He sends the Eblan Four to gather information around the world, but when the tower begins to glow, Edge sets off to investigate it himself.

Later, Edge returns to Eblan with Rydia, Luca and the Man in Black to find the castle in flames as the Second Battle of Eblan ensues. When Rydia tells him it is the work of Ifrit, Edge challenges him, but is defeated. Rubicante appears and attacks with Inferno, teaching Edge to use an explosion to disperse the flames. Edge and Rydia learn the Inferno Band and use it to quell Ifrit's fire attacks. When Ifrit is weakened he comes to his senses and rejoins Rydia, and the fires around the castle are extinguished. By repelling the monster attack, Eblan is the only nation where history does not repeat itself from 17 years ago.

There are no shops in the region in Final Fantasy IV.

The castle's main hall is long with several empty chests, and one unopened chest behind a hidden passage directly in front of it. The second floor antechamber before the throne room has several unopened chests in rooms accessible through hidden passages in the throne room. In Final Fantasy IV: The After Years these side rooms connect to the antechamber and are larger to accommodate equipment shops, and the first floor's side rooms are hallways leading to larger rooms containing an inn, a save point, and an item shop.

It is the third room accessible from the castle's entrance if the player keeps straight. There are two secret passages here that each lead to a room inaccessible from the previous floor. Behind the throne, a Ninja Sutra is found. During the game's ending, Seneschal and Edge are shown in the room—Edge is daydreaming about Rydia and Seneschal is scolding him. In The After Years, the hidden passages to the lower floor are removed.

The west tower contains two floors, and four chests behind hidden passages. On the ground floor, one chest is reached via a passage from the upper floor, the other is through a passage in the wall located by walking down towards the door out of the tower and walking right. On the second floor, a spot between two pots marks a passage to two other chests. In The After Years a staircase is added to a third floor that serves as Edge's bedchambers, but the tower's layout is otherwise the same.

The cellar passage is accessible from the east tower as described above. Once the player is in the passage, they cannot return to the castle, and the only way out is at the end of the passage. There is a set of stairs that lead outside the castle.

The After Years Edit

Inside
Note: Ifrit cannot be defeated when fought as a random encounter.

The background music that plays inside Eblan Castle is "Castle Damcyan".