Eat (食べる, Taberu?), also known as Devour, is a recurring ability in the series. The user swallows a weakened opponent whole, treating them as being removed from the battle, and sometimes granting the eater some sort of benefit.

Devour is a command ability in which the party member attempts to eat an enemy. The ability can be learned from the Guardian Force Eden and taught to any GF via the Hungry Cookpot item.

Depending on the particular enemy and its level, the character may gain stats, recover/lose HP, or be inflicted with negative status effects. A successful Devour can be rare, especially in regards to stat-raising effects. It is recommended an enemy be weakened before attempting Devour. With Devour, it is possible (although extremely time-consuming) to max nearly all stats. If successful, Devour will earn the player only AP and no EXP. Human enemies, robotic enemies, and bosses (with the exception of Rinoa during the Adel battle) cannot be devoured.

In a comical fashion, when a Devour attempt is made, the vision is censored and the screen will change to pictures of snapdragons, an ocean, or a green field. The background music will also stop temporarily. If the Devour attempt is successful, the player will hear the sound effect of something being eaten. If it fails, the player will hear a buzzer. Afterward, comments will be made on screen displaying the effect of the Devour ability. If the target's HP is greater than the user's HP, Devour will fail and the target will take 8 damage, though "miss" will still be displayed.

The list of enemies that grant stat boosts when eaten. All enemies must be above level 30.

Eat is Quina's ability, and the method by which they learn Blue Magic. Eat removes an enemy from battle if their health is 25% or less of its maximum value, and if it is an enemy Quina can learn a Blue Magic spell from, they will learn it. Eating subsequent enemies will not affect Quina's magic, but will kill the enemy. In Trance, Quina's ability changes to Cook, which has the same effect but works on enemies at 50% or less HP.

Eat is the default Soul Break for Quina. It deals damage to one target with a slight chance to KO the target.

Quina's card has Eat as its special ability, usable for two Water CP and discarding another Quina card. The player can select an opponent's Forward that has received damage, and Breaks it if it has an ability or special ability. 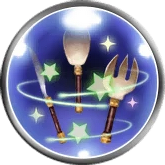