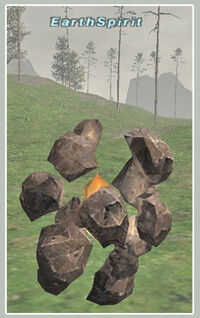 Earth Spirit is one of the elemental spirits callable by Summoners in Final Fantasy XI. It can be learned at level 1 from an Earth Spirit Pact, which can be bought from a merchant in Norg for 450-525 gil, or bought from the Auction House if sold by profit-seeking players who bought the pact in Norg. The Summoner has no direct control over Earth Spirit's spellcasting.

Earth Spirit is more likely to use powerful spells in dusty weather or on Earthsday. The delay between its spells can be reduced by having higher Summoning Magic skill, wearing Summoner's Spats, or summoning the spirit in its matching day and/or weather.