My power is protected under the shaking ground.

Message on the mural.

The Earth Shrine is a shrine built to house the Earth Mirror in Final Fantasy IX, located on the Outer Continent. The party splits into four teams of two to tackle all four shrines simultaneously.

Zidane and Quina are chosen to go to the Earth Shrine, where they meet the Earth Guardian, whom Kuja has warned of their arrival. The Earth Guardian is the only one of the four shrine guardians to be fought as a boss. After they defeat the guardian, Zidane and Quina release the Earth Seal, thus allowing access to the world of Terra. The surrounding earth of the shrine is subjected to constant earthquakes or tremors.

The world map outside the shrine consists Triquai Plains and Kuentis Peninsula. The below charts list "disc 1" encounters though it not possible to come here yet at that point in a normal playthrough.

The shrines refer to the elemental shrines from the early Final Fantasy series where crystals were housed.

Data hacking shows that there are many gaps in the numerical sequence of battle formations and monster IDs showing that many battle formations and monsters were deleted prior to the final version. Three missing monster IDs appear around the "Earth Guardian", making one suspect that originally the player was to fight all four of the guardians instead of only one (in the final game, the other three are defeated via cutscenes).

Earth Shrine on the world map. 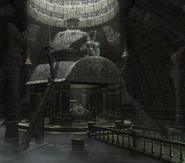 The Japanese dungeon image for Shrines of Ipsen in Final Fantasy Record Keeper.