The Earth Shrine is a location in Final Fantasy Brave Exvius. It houses the Earth Crystal in its innermost chamber, and is located near the northwestern coast of the Grandshelt Isles' main landmass, within the Kingdom of Grandshelt's territories.

Built to house the Earth Crystal, a barrier was placed around the Shrine so that monsters would not enter. The location remained undisturbed until the Sworn Six of Paladia decided to destroy the crystals, dispatching Veritas of the Dark to do the deed. Veritas broke the barrier and entered, along with a horde of monsters.

Upon the request of a mysterious girl, the Grandshelt knights Rain and Lasswell head into the Shrine, and fight their way into its innermost chamber. There, they find Veritas contemplating the crystal and try to defeat him, but Veritas easily defeats the two and shatters the crystal. Its destruction upsets the shrine's balance and as it begins to crumble, Rain and Lasswell are teleported away by the girl to the shrine's (now ruined) entrance.

Perpexled, the duo wonders about what has just transpired, when they hear one of their soldiers scream. They run to their airship, which has been attacked. One dying soldiers them the man in armor (Veritas) has attacked them. Upon his death, Rain and Lasswell decide to return to the castle and make a full report to the king, and to arrange for the burial of their fallen subordinates. They leave the shrine and enter Latius Woods.

Party of 2 or more (companion included)

Party of 2 or more (Companion included)

No items (except keys)

Defeat a belmodar with a limit burst

In the exploration, players must navigate through the ruined shrine's layout, and due to the debris, they must walk towards the exit in an S-shaped corridor from south to north. There are six normal treasure chests and a single silver chest, containing a Recipe for Barstone. There are three collection points. At the end, they will be faced with a low-level Belmodar.

This stage cannot be accessed until the player reaches and exits the Town of Mitra.

The quest "Secrets Unearthed" requires that Rain and Lasswell find a secret book at the Shrine. The book is located inside a chest that only appears while the quest is in progress. It can be found midway the exploration's route, to the east.

"Into the Labyrinth" plays while walking in Earth Shrine - Exploration. It has the Crystal theme remixed into it. The battles themes are "DUEL!!" for regular enemies, and "Onslaught" for Belmodar in all the stages. 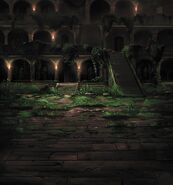 The Earth Crystal at the innermost chamber, and Veritas of the Dark.