A rod imbued with earth and nature.

The Earth Rod (土の杖, Tsuchi no Tsue?) (simply Rod in previous versions) is a key item from Final Fantasy. A magical staff imbued with the power of earth and nature, it is received by the Warriors of Light after they defeat the vampire. The Warriors of Light use the Star Ruby they find after the vampire's demise to pass through the Giant's Cave. They then head to the Sage's Cave, where Sadda gives them the Earth Rod. It is used to reveal a hidden passage on the third floor of the Cavern of Earth, leading down to the Lich. 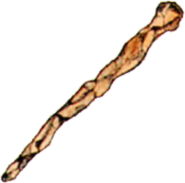