Final Fantasy Wiki
Register
Don't have an account?
Sign In
Advertisement
in: Worlds, Final Fantasy: The Spirits Within

Earth (The Spirits Within)

For a history of this land, see Final Fantasy: The Spirits Within timeline

The world of Final Fantasy: The Spirits Within is a fictional depiction of the real-world Earth in crisis, set in the 2060s.

The majority of the film's plot is situated the New York Barrier City and various Wastelands in the United States of America, with brief visits to the Caspian Mountains in Eurasia and outer space in the Zeus Cannon in orbit around the planet.

A fictionalized version of real-world planet Earth appears in Final Fantasy: The Spirits Within. In this future, the world has been invaded by ghost-like aliens called Phantoms who have forced the human race near the brink of extinction. What few cities are left are fortress towns called Barrier Cities, whose bio-etheric ovo-pacs protect the inhabitants against the Phantoms. Outside of the Barrier Cities, the Earth has been turned into a barren wasteland, with all life killed by the Phantoms. Cities like New York have been completely devastated outside of the section protected by the barrier.

The climates shown are that typical of their relative real-world locations, with the mild temperatures of New York and the snow-capped Caspian Mountains.

With the majority of the world's wildlife and plants consumed by the Phantoms, the remaining populace has been kept in protected conservation zones and wildlife preserves.

A culture in crisis, hiding behind bio-etheric shields from an enemy they cannot naturally see. The political aspect of the American world, as shown in the movie, seems to be run by a council. The decisions of who have authority over the actions of the United States Military Force. It is unknown whether this is just a military council or if these people dictate civilian matters as well.

Based on the technology of the real-world, late-1990's, early- 2000's, the technology shown in the world of Final Fantasy: The Spirits Within focuses on the military and scientific worlds.

Military technology has advanced, thanks to the findings in the science of Bio-Etherics. Primary field weapons now being biotic-laser guns and plasma grenades, the development of which were necessary due to how the Phantoms are immune to projectile fire. It should be noted that projectile weaponry are still in rotation, with a variety of rapid fire rifles and single-shot pistols

Technology used by the scientists involved in Bio-Etherics bare remarkable similarities to their real-world cousins, though these are powered or use biotic energy in order to affect Phantom tissue.

Perhaps the most notable scientific contribution is the Barrier Shield of the Barrier Cities; a series of energy walls supported by a metal frame that resonates at a frequency that the Phantoms are unable to penetrate. Each "shield" is powered by a power generator operated from within the city. Other contributions include the current plasma technology used by the USMF and a modified type of laser surgery that uses a biotic laser instead of one of hard light.

Each biological being exists as a physical entity and a bio-ethereal entity based on their biological energy. A science on the exploration of these bio-energy forms, Bio Etherium, has been formed by Dr. Sid and also explores the concepts of Gaia and the existence of the Phantoms.

The Architecture shown in Final Fantasy: The Spirits Within seems to be frozen in the early real-world 2000s, with the constructive emphasis on practical structure than creative style. 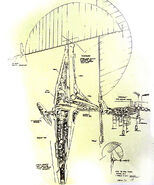 Earth.
Final Fantasy: The Spirits Within
Community content is available under CC-BY-SA unless otherwise noted.
Advertisement