The Earth is the name of the planet in Final Fantasy IV, Final Fantasy IV -Interlude-, and Final Fantasy IV: The After Years. It is known to the Lunarians as the Blue Planet and to the Dwarves as Mother Earth (SNES version). It is divided into an Overworld and an Underworld. It has two satellites: The Red Moon, and a larger, natural moon. The True Moon briefly orbits it during the events of The After Years.

Move mouse cursor over a location for a link to that location's article.
Earth 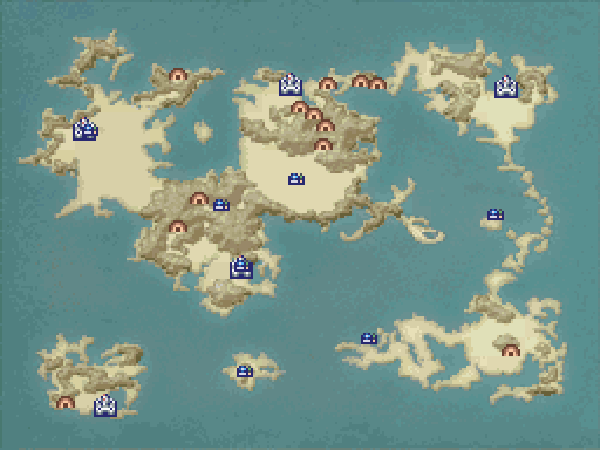 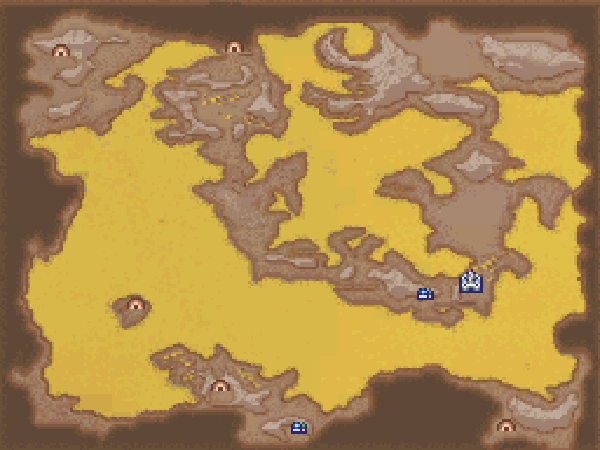 The Overworld is a location and the name of the Earth's surface and it is where most people live. It is home to the four Light Crystals.

This gallery is incomplete and requires Beach added. You can help the Final Fantasy Wiki by uploading images.

This gallery is incomplete and requires Beach added. You can help the Final Fantasy Wiki by uploading images.

This gallery is incomplete and requires Desert, Forest and Beach added. You can help the Final Fantasy Wiki by uploading images.

I'd never dreamed there was another world beneath the surface of ours.

The Underworld is one of three locations. It represents the inside of the Earth, and thus is filled with rock and magma. Its main inhabitants are Dwarves; however, a cave leads to a world in which the Eidolon exist. Airships cannot fly over the lava unless they are coated with Mythril. The Underworld is home to the four Dark Crystals.

Many years prior to the events of the story, the Lunarians lived on a planet between the "Red Planet" (Mars) and the "Great Behemoth" (Jupiter). They also refer to Earth as the "Blue Planet".

The Earth appears in the background of the Lunar Subterrane stage.

The Earth appears in the background of the Lunar Subterrane stage, though it appears more in the forefront.

The picture of Earth shown in the GBA release of Final Fantasy IV and The After Years is actually the famous image of the Blue Marble.

In the 3D releases, when the players travel from the moon to Earth, the real life Earth is shown.

Cid seals the entrance to the Underworld (iOS).

The Earth, as seen from the Lunar Whale (iOS).

[view · edit · purge]Earth has been referred to as the Blue Planet due to the abundant water on its surface and/or the atmospheric hue.

In the Super Nintendo translation, the Dwarves refers to Earth as Mother Earth. Mother Earth or Mother Nature, a common metaphorical expression for the Earth and its biosphere as the giver and sustainer of life.