You're pitiful and useless. The darkness that lurks within all of you is the disease eating away at this planet. And if you want to die meaningless deaths, I won't stand in your way.

Eald'narche (エルドナーシュ, Erudonāshu?) is a non-player character from Final Fantasy XI expansion Rise of the Zilart. He is a Zilart prince, the brother of the Archduke of Jeuno, Kam'lanaut, and is the main antagonist of the expansion's storyline.

Eald'narche appears in the form of a young boy, wearing dark blue and black robes with yellow linings and crossing brown patterns on the sleeves. He has short-cut straight blond hair, and blue eyes. His left eye is covered by an eye-patch, concealing that its current appearance as a crackling yellow vortex surrounded by violet energy.

Despite his youthful appearance, Eald'narche is the elder brother of Kam'lanaut, his aging frozen by the Mothercrystal, and he acts as a younger brother to throw off suspicion of his true motives. 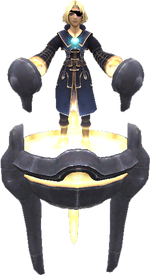 Upon the destruction of the Zilart, Eald'narche and his brother slept frozen in the tower of the Delkfutt's reaction chamber until Raogrimm reactivated the crystals. When they awoke, the two found themselves in a different time, with the connection to Tu'Lia broken. The princes could not repair the connection, as Raogrimm's existence was creating too much "noise" within the crystals.

They traveled to the nearby town of Jeuno where they set about improving their position, revealing the knowledge of Synthesis and crystal-powered engines to the people. Their influence turned the small fishing town to a bustling city in a short period of time. Eald'narche was content to take a back seat in this endeavor, allowing his "older brother" to win the hearts and minds of the people. By the time the rumblings of the Crystal War had begun, Kam'lanaut had already become the leader of Jeuno, second only to Jeuno's home country, the Republic of Bastok. When the Beastmen began amassing, Kam'lanaut proposed to the president that Jeuno secede from Bastok. This allowed the Republic to focus their troops on their home front, and also gave the Zilartian princes the power they desired.

During the Crystal War, Kam'lanaut gathered the four nations together, helping them unite under the common banner of the Allied Forces of Altana. It was this union that allowed the Enlightened Races to drive the beastmen back, carving a path to the home of the Shadow Lord himself. When the beastmen were defeated, the Archduke was hailed as a hero, and the two Zilart princes had earned the trust of the people, exactly as they had hoped. It was this trust that allowed them to restart their plans to open the Gate of the Gods. The Zilart princes formed the Armathrwn Society to this end, gathering the few Zilart left, as well as some loyal Kuluu.

Twenty years later, in the Age of Adventurers, the princes' plan would begin to come to fruition. The archduke enlisted the aid of an adventurer sent by their region of origin to obtain magicite from each of the three beastmen strongholds. When this adventurer went on to defeat the Shadow Lord a second time and end his resurrection, the princes put their plan into action.

When the Shadow Lord is defeated, the Zilart princes summon the Warriors of the Crystal to defeat the adventurer and the others assembled there. Raogrimm, in an act of atonement, uses the last of his power to delay the Warriors and the Zilart princes, allowing the adventurers to escape. Believing the adventurers to be dead, the Zilart princes continue with their plan, attempting to repair the Chrysalis Core in Delkfutt's tower to open the pathway to the Floating Continent of Tu'Lia. While Eald'narche secretly ordered the Ducal Guard to kidnap Aldo's sister Verena to use her power to resonate with the spirits of the beastmen and open the pathway. With the guidance of the Kuluu and a holograph of Dawnmaiden Yve'noile, the adventurers find the princes and attempt to stop them from reviving the Chrysalis Core. When Kam'lanaut is defeated, Eald'narche casts him aside, using Verena to open the pathway to Tu'Lia.

Once the adventurers reach Tu'Lia, they defeat the five Crystal Warriors and open the path to Eald'narche's inner sanctum. There, he thanks the adventurers for helping him to further his plans, and offers them the chance to follow him and help him open the Gate. When they decline, Eald'narche attacks them. Defeated by the adventurers, he attempts to restart the Crystal Line to cause another meltdown, similar to the one the Kuluu perpetrated against the Zilart. Lion sacrifices herself to stop him, and in his final moments, Eald'narche sees Yve'noile, who lectures him on the naivete of his actions. With both princes defeated, the world of Vana'diel is saved from the Zilart threat.

Both Kam'lanaut and Eald'narche reappear in the "Apocalypse Nigh" quest, available to players who complete both the Rise of The Zilart and Chains of Promathia expansion storylines and challenge Bahamut. Both princes are simultaneously fought in a rematch at the Empyreal Paradox.

Eald'narche is fought twice, first in Zilart Mission 16: The Celestial Nexus as the final boss of the Zilart campaign, and again alongside Kam'lanaut in the quest Apocalypse Nigh.

Eald'narche appears as a playable character and boss. 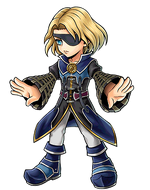 A mysterious boy whose single beautiful eye hides a cold smile that seems to ridicule all that he sees. He doesn't care what happens to this useless world or its people as long as he can succeed in opening the Gate of the Gods...

Eald'narche appears as an enemy during Battle Music Sequence (BMS).

Eald'narche appears as a boss and a Legend. He can use both his Phase Shift and Chronos Sling abilities. 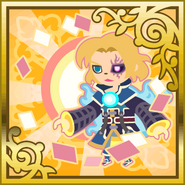 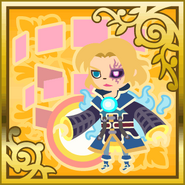 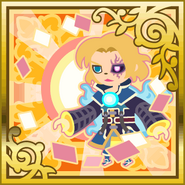 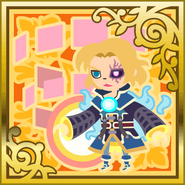 Eald'narche appears as a card in Lord of Vermilion II.

In the Chains of Promathia expansion, the Jeunoan officials do not acknowledge Kam'lanaut or Eald'narche's disappearances, stating that they are either "away" or "busy," and all official matters are instead presided by the Duke Vicarious Esha'ntarl. This is because players may not have completed the Rise of the Zilart expansion, which requires advancing to Rank 6 on the national missions to begin, whereas the Chains of Promathia missions have comparatively low requirements to begin and do not require any particular rank, though storywise it is possible that the Armthwyn Society did not want to alert the public as to their ruler's disappearance. 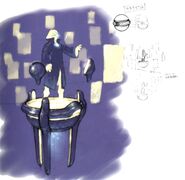 Concept art of Eald'narche in battle.