High seat of Gallione and home to Duke Larg, its lord, this city is second in size only to the royal city of Lesalia.

Eagrose Castle (イグーロス城, Igūrosu-jou?), also known as Igros Castle, is a location from Final Fantasy Tactics. It is the capital of Gallionne, and home base of House Beoulve and the Order of the Northern Sky. It is also the site where the Lucavi demon Adrammelech was defeated.

The party confronts Dycedarg in the castle's keep.

The main gate of the castle, as shown in cutscenes.

The office, as shown in cutscenes.

The balcony of Eagrose office. 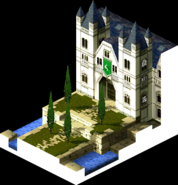 The residence of the Beoulve family.

An office that belongs to the Beoulves.

An office/bedroom that belongs to the Beoulves.