Coph-coodg
Lah-laakh
Neh-needg
The Ea are a race of sentient life-forms that dwell in Ultima Thule in Final Fantasy XIV: Endwalker.

The Ea are a race of non-corporeal beings, which appear as amorphous dark bodies covered in white sheets and crowned with uniquely shaped white halos. They have two arms that have a thumb and two long fingers each. Some Ea that lose their minds to madness turn a red-orange color, get multiple rings for eyes, and become violent. The appearance of the physical forms they once held is unknown, every living Ea having forgotten what they once looked like. The Envious Ea speculates that they once had limbs like the Warrior of Light, but concludes that they were likely neither similar to the Warrior nor the Namazu.[1]

It is possible that the Ea hail from either Deneb III or Sadr IV, both stars the Ea have referred to in Ultima Thule. Being the third planet Meteion found, she referred to the planet as "Tria". The vast majority of their kind, upon discovering that the universe was doomed to expand until its eventual heat death, decided to quit their pursuit of science and await their supposedly inevitable deaths.[2]

The Wee Ea is a minion and Ea is a Triple Triad card obtainable by players.

The Ea had a period of scientific exploration they referred to as their "space-time exploration phase", during which they encountered organisms such as the E.B.E.-9318, which they describe as the appendage of an extra-dimensional being that watches the observable universe.[3]

In their scientific pursuits, the Ea eventually discovered that the universe would continue to expand until meeting an icy end where nothing would be left to live. Despite their best attempts, they could discern no other outcome for the fate of the universe, the efforts of doing so becoming "synonymous with vain effort". Deciding that this rendered life meaningless, they gave up their scientific pursuits to await their coming end, many seeking the most meaningful end they could.

When the Meteia set out on their journey into the stars in search of the meaning of life at the behest of their creator, Hermes, the Ea were the third race they encountered. Overwhelmed by the despair they felt, the Meteia unleashed the power of dynamis and brought about the Final Days on their world.[2]

When the Warrior of Light journeyed to Ultima Thule, the Ea were one of the races that Meteion reanimated from dynamis to stop the Scions of the Seventh Dawn from reaching her nest in the dead star above. Y'shtola Rhul and Urianger Augurelt sacrificed themselves to overcome the Ea's despair so that the remaining Scions could press on to their goal.[2]

After the Meteia's defeat as the Endsinger, the Ea continued to exist in Ultima Thule,[4] some stating that they feel vague stirrings of hope again.

Ea names consist of two syllables separated by a hyphen, with the second syllable starting with the same two letters as the first, repeating the second letter, and then ending with a couple consonants, commonly -kh, -th, or -dg.

Abode of the Ea in Ultima Thule in-game.

Elegeia in-game, the site where the Ea record their epitaphs. 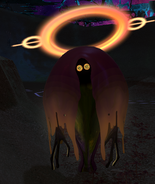 The Wee Ea minion as it appears in-game.