We are EXINERIS. For generations, we have supported the livelihood of the people of Lestallum, and will continue to provide power for generations to come. EXINERIS Industries, where the light of hope shines ever bright.

EXINERIS Industries is an energy company in Final Fantasy XV operating from the town of Lestallum in the Cleigne region of Lucis. The EXINERIS Power Plant provides the outlands of Lucis with energy drawn from the meteorshards said to have fallen to Eos millennia ago that exude energy. When Prince Noctis's party visits the Disc of Cauthess, Ignis Scientia explains that the meteorite, called the Meteor of the Six, exudes heat, which is harnessed to power Lestallum.

Most of the workers for the energy plant are women, among them Holly Teulle. EXINERIS operates a ropeway around the Cleigne area. Lestallum is an industrial city built around the energy business.

The energy company is called "Comrade Industries" in concept art. "Comrades" was later used as the name for the game's multiplayer expansion.

When Prince Noctis's party visits Lestallum, Iris Amicitia shows Noctis around the town. They visit the outside of the EXINERIS power plant, and Noctis learns it mostly employs women. The plant is later taken over by daemons and the townsfolk hire hunters to dispatch them. Noctis joins the fray, and together with Gladiolus Amicitia (who aids the former anonymously) clears the plant of monsters. Though the plant's generators incurred damage, pulling them offline temporarily, repairs are completed quickly and there are outages resulting from the incident. Holly, whom the party asks to treat mythril for the use for fixing King Regis's boat, is impressed with Noctis's help, and asks him to check out the malfunctioning ropeway system for her.

Noctis's party arrives in Lestallum during the Assassin's Festival. It is taken over by Loqi Tummelt and his magitek infantry, who take the lead engineer Holly captive to lure out Noctis. They place a Wallbreaker Wave generator at the plant to disable Noctis's magic powers. Noctis gains access to the plant by assassinating various MTs that hold key cards, and while he battles Loqi's magitek armor outside, Cindy Aurum dismantles the Wallbreaker Wave generator at the plant.

When the Starscourge overwhelms the world, EXINERIS is the only operating power plant left. It keeps Lestallum illuminated, keeping daemons at bay, and thus most people of Eos migrate there. The former members of Kingsglaive and Crownsguard team up with the Hunters to collect meteorshards and route electricity to remote areas. The shards are not an in-exhaustive energy source, however, and the company works to acquire more meteorshards or to develop an alternative source of fuel.

A Precious Source of Power[]

In the "A Precious Source of Power" main quest, Noctis must handle some daemons in the power plant while Holly refines the mythril the party just found. The player must meet the Hunter (Gladiolus), who will help as a guest character during the quest. Upon entering, a group of goblins and imps must be defeated for a second wave to appear, although there will be a time limit; if the player fails to defeat all enemies in time, the game is over.

In a Heat Haze of Glory[]

The hunt is accepted from town and pits the player against an aramusha who can kill in one hit and has strong area of effect moves. It can launch purple tentacles out the floor to deal magical Darkness damage and can impale Noctis upon its katana. Aramusha is weak to lightning, one-handed swords and daggers, and uses both magical and physical attacks. Its attacks can be anticipated and parried.

Concept art for the power plant in Lestallum. 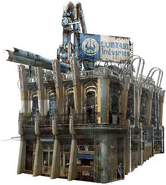 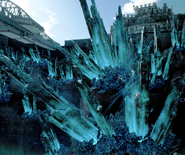